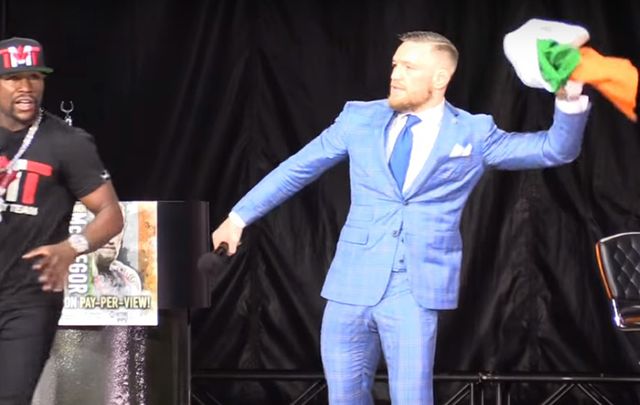 During their Las Vegas press conference Mayweather was handed a tricolor flag from the crowd. He unfurled it and wore it around his shoulders to McGregor's clear disgust.

Then he handed it off to McGregor who proceeded to throw it on the ground.

The Irish tricolor flying in the wind.

In so doing he showed clear disrespect and ignorant behavior to the Irish national flag, something that is very clear in the official rules governing the tricolor.

As TheJournal.ie pointed out in a recent article, "The main things to remember when handling the flag is: don’t write on it and don’t let it hit the ground."

MacGregor showed no respect for his own tricolor. He threw it on the ground.

“Care should be taken at all times to ensure that the National Flag does not touch the ground, trail in water or become entangled in trees or other obstacles.”

“The National Flag should never be defaced by placing slogans, logos, lettering or pictures of any kind on it, for example at sporting events. 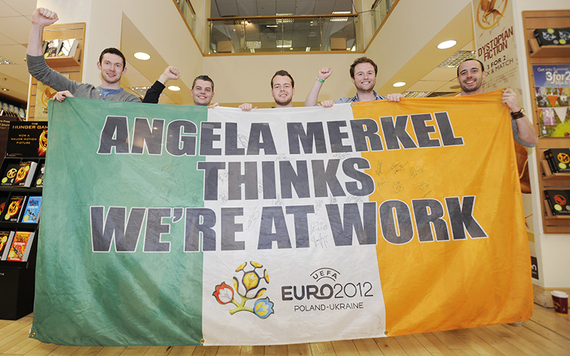 Great job supporting our soccer team lads but it's a no to writing on our national flag.

“The National Flag should not be draped on cars, trains, boats or other modes of transport; it should not be carried flat, but should always be carried aloft and free, except when used to drape a coffin; on such an occasion, the green should be at the head of the coffin.

“The flag is in its 98th year, as the official flag, originally the tricolor was donated by women in the French revolution to the great Irish American hero Thomas Francis Meagher who ensured it became Ireland's national colors. It flew proudly over the General Post Office in Easter 1916.”

And now here comes McGregor who treats it like a dishrag.

Thomas Francis Meagher or Patrick Pearse would not be pleased.