If Ireland’s tricolor flag could talk

"Even in good times, when this Republic seems to be going well, I often feel like dropping down to what they call half-mast." 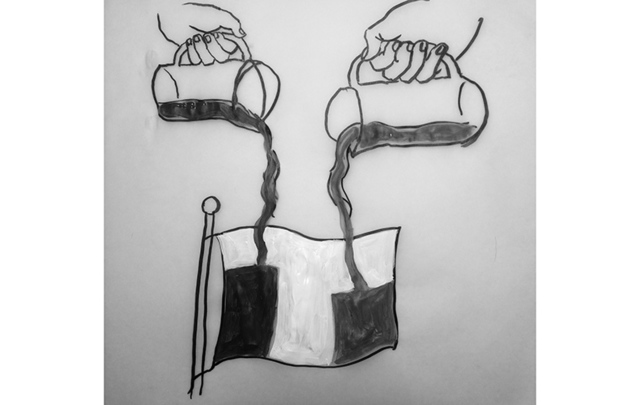 "It's the dyemasters of the world that dye us flags different colors that drive the world mad and kill millions." Caty Bartholomew

There's a bitter enough squall with cold rain in its teeth when I arrive into Ennis town to meet a friend and relax for a couple of hours. There are Tricolors everywhere to mark the Easter season and they are taking a fierce battering atop their creaking poles.

I park near the courthouse off the center of the town close to the austere statue of Eamon de Valera, one of the leaders of the Easter Rising more than a century ago now which has always made the Easter season extra special on this island. He does not look to be enjoying the weather either.

The Tricolors close to him are rippling and flapping wildly on their poles as I park. I roll down the window to let the worst of the rain pass before emerging and watch the folk of Dev's favorite town scurrying away for shelter in doorways around the courthouse.

They would all have heard the rippling and straining of the flags but, dammit, I am a son of Mary Bannon, who had a kind of fey side to her, and I have a zany head on me as ye well know by now, so I quite clearly heard the old Tricolor closest to de Valera's statue complaining very clearly and audibly to her nearest fluttering neighbor about her plight in Easter 2017.

She was old, this Tricolor, definitely female by the sound of her voice, and her green strip was appreciably frayed and ripped a little along the top edge.

"I'm sick of it all, sick to death, sick of it all," is the first I heard from her. "I'll be blown down into the bloody river before this day is out and that's for sure. Sick of it I am.”

Her neighbor made soothing remarks which I did not quite catch before she continued, "More than a hundred years since my grandfather was hoisted in the Rising above the GPO in Dublin and was cut to rags by shells from the English gunboat Helga on the Liffey and, after all these years, we are still no better off really than we were back then.

“Dev here beside me is long in his grave, but the English still control a quarter of the country, the whole of the Six Counties for God's sake, and with this blasted Brexit business they will be imposing direct bloody rule again since the power-sharing assembly in Stormont has collapsed. I tell you I'm sick of it all so I am.”

Her younger Tricolor neighbor made more soothing and mollifying remarks to the effect that things would be better tomorrow and the squall would pass, and much had been achieved by establishing a republic despite the worst efforts of John Bull. That calmed her down a small bit, and she was more reflective and sad when she resumed her complaining.

"It's the sad truth, my sister, when you think of it that all flags like us were simple white pieces of cloth when we went out of the factories. We were white as the driven snow. We were emblems of peace and goodwill towards all, carrying no threat of any kind to anybody,” she said.

“Even today in far off lands like Syria and across the Arab lands there are little children and old people raising white flags of peace and surrender over their small heads as they run away from wars and killings. And those white flags, like we once were, still save the lives of many of them.

"It's the dyemasters of the world that dye us flags different colors that drive the world mad and kill millions. I call them the dyemasters and that's the truth. It started long ago when the ones they called the Crusaders dyed red crosses on their white flags and went out and slaughtered those they called infidels. Right? And the world is still paying the price for that.

“Look at you and I that are dyed green white and gold for God's sake. And think of the thousands that have died up and down the country for the past hundred years because others were blindly following flags that had also originally been white but were dyed red, white and blue and called Union Jacks.

"Even in good times, when this Republic seems to be going well, I often feel like dropping down to what they call half-mast when I reflect on our own Civil War times here, like the day before yesterday, when the English were gone but both sides, following the same Tricolor, treated each other worse than the Black and Tans ever did. Dreadful, dreadful and very sad and the politicians we have today still remember that Civil War too well and too often."

The younger flag said she could not disagree with that at all.

The old flag then began to muse aloud about the dire impact upon entire nations of colors and symbols being imposed on national flags by, again, what she called the dyemasters.  She mentioned the horror of the black swastikas printed on German flags during World War II and what they represented, and she said that sight of the vanquished Confederate flag after the American Civil War still caused community friction sometimes.

But she really intrigued me when she began to argue that all the more warlike and powerful nations of the world always have a blood-red segment at least on their national flags. The dyemasters, she argued, ordained that.

The young flag said at least there was no red imposed on the Tricolor and that was good.

"Maybe,” said the old lady. "But there's a lot of bloody red on the Union Jack and stripes of the same color on the American flag. It's the same with the modern flags of countries like Germany and France and Iran and Italy and North Korea that is likely to start the next World War, mark my words.

“Russia likewise and Japan, that has a red blob that would remind you of the attack on Pearl Harbor and Syria, now bleeding to death, has a red element, fittingly, on its flag too.  And the red flags and angry looking stars on the flags of China and Turkey are very foreboding altogether.”

The squall passed over at this stage and the surreal conversation ended and my friend was waiting, so that was the end of it for me.

My friend told me I was stone mad altogether when I reported my experience to him, but I responded by telling him to check out the symbols and colors on the world's national flags when he got back home.