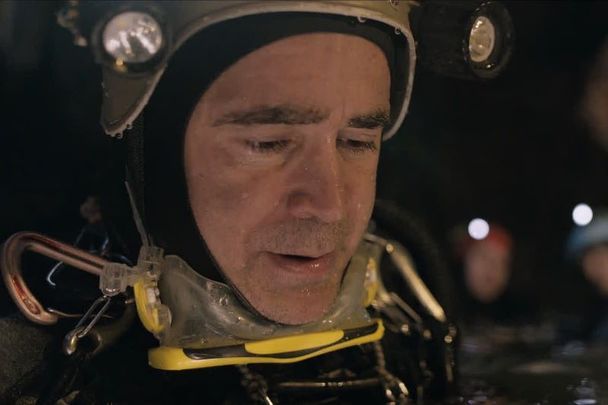 The underwater scenes in “Thirteen Lives”, Colin Farrell’s new movie which drops on Amazon Prime on August 5, are really intense, so it’s not surprising that the Irish star had some anxiety-inducing moments while filming.

The movie dramatizes the real-life 2018 rescue mission of a soccer team in northern Thailand trapped in the Tham Luang cave, a successful effort that attracted international attention at the time.

The actors in the film underwent intense scuba training, and once Farrell heard that his co-star Viggo Mortensen planned on doing his own stunts, Farrell went that route too – both of them play divers who rescued the 12 young soccer players and their coach.

“I might have to blame Viggo for that decision but, you know, in for a penny in for a pound. If Viggo’s in, I’m in,” Farrell told The Hollywood Reporter at last week’s LA premiere.

But staying calm under all that water wasn’t easy.

“I had a couple of really panicky moments underwater when I had to say to myself, ‘Just relax. Be calm. You’re fine. There’s nothing to worry about. Your tank is good, you’ve got a 60 percent full tank. Just slow your breath down. It’s okay,'” Farrell said.

"I had to say to myself, 'Just relax. Be calm. You’re fine. There’s nothing to worry about," Colin Farrell recalled of filming the harrowing underwater moments in #ThirteenLives https://t.co/HllDDkRvGE

Director Ron Howard praised Farrell and Mortensen for foregoing the use of stunt doubles.

“It made a huge difference for me as a director and it will for the audience because there are no quick cuts. Suddenly, you realize that what you’re seeing is really Viggo Mortensen and Colin Farrell. They’re in there,” he said.

Unsurprisingly, Farrell said that making "Thirteen Lives" was the most challenging film he’s ever worked on. But he wouldn’t trade his job for anything.

“I learn a bit about myself to it on the side but that’s not the reason I’m doing it, of course. It’s an incredible job, really, and an experience that I get to share with other people.”

Watch this trailer for "Thirteen Lives":