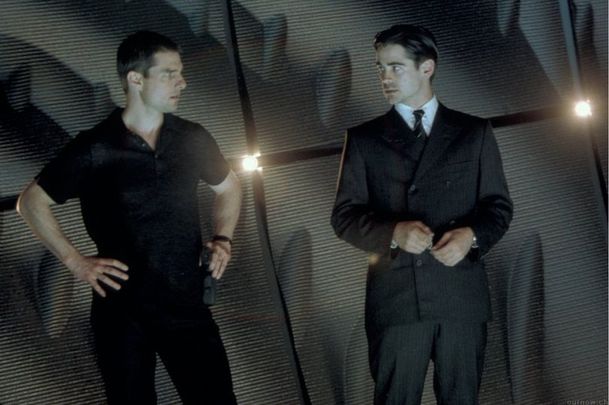 Colin Farrell's views on his "very competitive and very physically engaged" co-star Tom Cruise were revealed in an interview for the 20th anniversary of the 2002 Steven Spielberg movie "Minority Report."

There's no denying that Tom Cruise is the biggest movie star in the world by a mile. Just look at the rave reviews and boffo box office of "Top Gun: Maverick" which has more than $1 billion in the bank, every nickel of it is deserved because the film is so, so good.

It was 20 years ago that an Irish rookie named Colin Farrell co-starred with Cruise in Steven Spielberg’s "Minority Report," and a few websites last week marked the anniversary of the film for some reason.

Yahoo! Entertainment unearthed an old interview with Farrell in which he recalled working with the ultra-perfectionist Cruise. Colin landed the role of Department of Justice agent Danny Witmer after Matt Damon bowed out due to a scheduling conflict.

“I was 24 or 25 and it was my third or fourth film, and I was just going, ‘What the hell?’ You know, (Cruise is) very competitive and very physically engaged,” he said.

“I remember him walking on the set and screaming, ‘Are we making an action movie? Then why don’t I hear action?’”

“Did you see the stunts he did on Mission: Impossible where he’s holding onto the side of the plane?” he asked. “I mean, that’s mental illness. That’s not bravery. I mean, that’s mad.”

Farrell has gone on to his own impressive level of fame in the 20 years since. If he had listened to Irish music impresario Louis Walsh decades ago, he might not have ever met Cruise or any of the other luminaries he’s worked with.

Walsh recalled in a recent interview with Apple podcaster Kate Thornton that he told Farrell to pursue another career. "I said, ‘Acting Colin? You're wasting your time, it's too hard.' And we still laugh about that today. Colin is a brilliant guy,” Walsh said.

“He's everything I like about Ireland. He's funny, he's brilliant, he's good at his job. But he doesn't take it serious."

Watch the trailer for the 2002 movie, "Minority Report" here: