Christy Moore said "our tradition is in safe hands" after inviting Míceál Bennett on stage for a duet of "Nancy Spain" during his gig in Co Armagh. 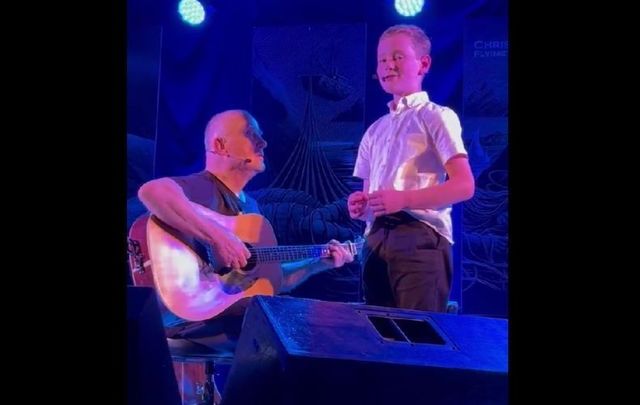 Irish music legend Christy Moore delighted a young fan by asking him on stage to perform a duet during a concert in Armagh on Thursday night.

Moore was playing a concert at Armagh City Hotel on Thursday night and invited young fan Míceál Bennett to join him in a rendition of "Nancy Spain".

Bennet rose to the task magnificently and received a loud round of applause at the end of the performance.

He even won the praise of Moore, who said on Twitter that "our tradition is in safe hands."

I was delighted to sing a tune with young Mícéal in Armagh last night - our tradition is in safe hands. Christy https://t.co/omQDPYfd7C

Bennett's mother Dearbhla wrote on Twitter that her son has "been singing Christy songs since before he could talk.

"This is beyond a dream come true!" she added.

"To everyone there who cheered him, stood for him, and came up to him afterward, you’ll never know how happy you made him. He’s been singing Christy since before he could talk, and Christy has replied to every letter Míceál wrote him. Christy is a living legend," the proud mum wrote on Twitter.

She added that her son got the ticket to see Moore as a birthday present and that Santie got him tickets for Moore's gig at Vicar Street last January. On top of that, Míceál used his birthday money to buy tickets to see Moore at Carrickdale Hotel in November.

Tagging Moore in a separate tweet, Dearbhla said: "Thank you will never be enough for making our son’s dreams come true.

"You truly are a living legend and a gentleman.

"Míceál will never forget this and is sleeping with your plectrum under his pillow."

@christymoore45 thank you will never be enough for making our son’s dreams come true. You truly are a living legend and a gentleman. Míceál will never forget this and is sleeping with your plectrum under his pillow ❤️ pic.twitter.com/O67UdBPDxh