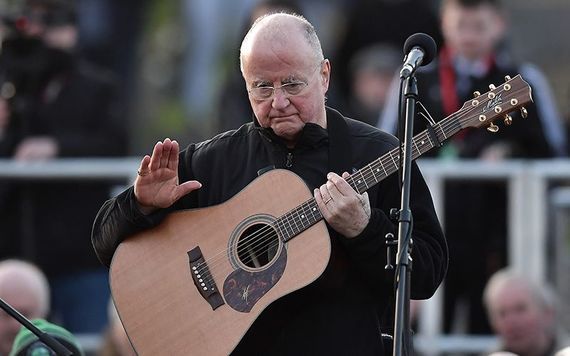 The 75-year-old Irish singer performed Aisling, written by Pogues frontman Shane MacGowan, and The Gardener, written by Dublin songwriter Paul Doran, in a classic performance on the social media platform.

Moore was in typically fine form in his opening preamble and explained that he had been struggling with the technical side of uploading videos to Facebook and enlisted the help of his son, Andy.

"I'm not very good on the technical end, and I was kinda moaning and groaning about it," he said in the video. "So Andy is on the other side of the device and I'm going to sing a couple of songs."

Read more: Famous Irish musicians you should have in every playlist

Moore sang The Gardener first and explained why he liked the song so much.

"I recorded this song of Paul's a few years ago and I just think it's such a beautiful song, yet it never really connected, nobody ever calls out for it."

After an excellent performance, he quickly moved on to a performance of Aisling - a song written by Shane MacGowan in the early 1990s that Moore has performed at his concerts for years.

Moore didn't give any preamble for his second song but has explained in past concerts why he likes it so much.

"Aisling is a woman's name, but it's also the Irish word for a dream. I was talking to Shane backstage in Finsbury Park some years ago and he told me about this lyric and sent it over to me, and I just started singing it," he said at an earlier concert.

The Irish music legend promised to do more Facebook performances now that he has conquered his technical difficulties and he urged fans to get in touch with requests ahead of the next performance.

We can't wait to see what he sings next week.

Read more: “Ireland’s greatest living musician” looks back on 50 years in the business