Irish actress and model Caitríona Balfe stuns on the cover of the January 2022 'Awards Insider' edition of Vanity Fair magazine. 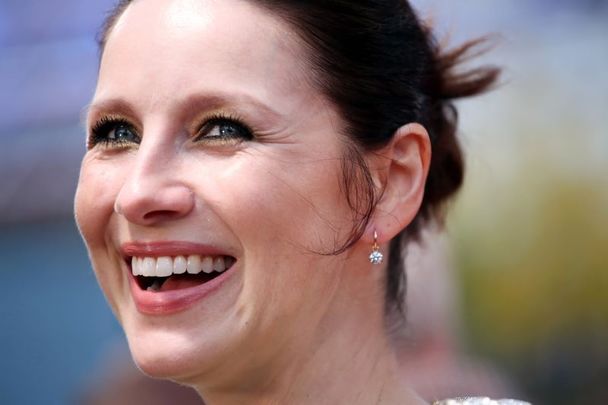 She didn’t win a Golden Globe on Sunday for her work in Kenneth Branagh’s Belfast, but Caitríona Balfe did make the cover of the new issue of Vanity Fair which she called a “dream come true.”

The interview was done in November in Los Angeles, where Caitríona traveled for the premiere of Belfast.

In tow was her new son who was born in August, and she spoke about her desire to keep his life as private as possible, especially as some of the fans of her hit Starz series Outlander are weirdly convinced that she and her co-star Sam Heughan are romantically involved in real life. (Not true. She’s been married to Tony McGill since 2019).

Balfe never announced her pregnancy. Instead, the world found out when she posted a pic of the newborn’s hand after his birth.

“I’m a very open person,” she told Vanity Fair. “It’s not like I was hiding my pregnancy. Everybody at work knew, all of my friends knew, anyone I came into contact with in my life knew. But in terms of putting that out there, I don’t see the value in that. I think there’s certain things that are nice to have for yourself.”

“When you have a kid, you become really protective,” Balfe added. “I don’t want those crazies — because that’s what they (obsessive fans) are — I just don’t want them talking about him.”

Home, she says, is primarily in Glasgow which is where she needs to be for Outlander. The sixth season of the show will debut on March 6.

One of the future goals the former model from Co. Monaghan has is directing. Kenneth Branagh, who won the Best Screenplay Golden Globe on Sunday, told Vanity Fair he thinks Caitriona would be superb.

“I personally would be really fascinated to see her direct,” he said. “Because that compassionate emotional intelligence and genuine, significant intellect I think will also be a great storytelling voice to see in the future.”