Forget your cute pumpkin get-ups or sexy nurse costumes, Dublin’s Halloween is all about horror as the Bram Stoker Festival hits the capital this weekend. 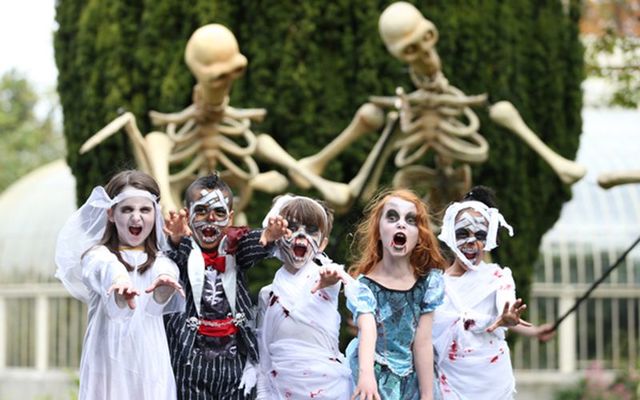 The launch of the Bram Stoker Festival in the Botanic Gardens in Dublin. RollingNews.ie

Forget your cute pumpkin get-ups or sexy nurse costumes, Dublin’s Halloween is all about horror as the Bram Stoker Festival hits the capital this weekend.

Thousands of merrymakers, many dressed as vampires, zombies, Goths and the undead, will take to the streets this weekend to celebrate the Halloween season and “Dracula” author, Bram Stoker, a Dublin native, with the Bram Stoker Festival.

Running from Friday, October 26 until Monday, October 29,  the four days of festivities included a Macnas parade, a Stokerland Victorian pop-up fun park and an audio ghost tour around Dublin.

Back in 2014, it even had a Goths versus zombies dance-off at the junction of Grafton Street and St Stephen’s Green!

"Whether you’re a resident vampire or visiting from further afield, Bram Stoker Festival 2018 has something for everyone in its gothically inspired programme of events," the festival website states.

"Get ready for four days of living stories and four nights of deadly adventures as Dublin gets gloriously gothic this October Bank Holiday Weekend.

Announcing the parade route for @macnasireland 'Out of the Wild Sky' on Bank Holiday Monday 29th Oct at 7pm! A haunting procession of otherworldly magic from these world-renowned pioneers of imagination 💫🦇🍂🎃. Come out and and celebrate Samhain in #Dublin at #BramStokerFestival. Full details of the parade and route now available on our website (link in Bio) #loveDublin #BiteMeDubiln #Halloween #parade #visitdublin #macnasparade

"The Bram Stoker Festival playfully celebrates the gothic, the mysterious, the after-dark and the thrill of Halloween, and delves into the legacy of one of Ireland’s most treasured authors. The packed programme of events devilishly mixes family-friendly adventures with late-night antics for mates, dates and everything in between.

Have you visited the Bram Stoker Festival before? Let us know what you thought of it in the comments section, below.