Bono and The Edge team up with David Letterman in Dublin for St. Patrick's Day special

U2 duo Bono and the Edge have teamed up with David Letterman to film a St. Patrick's Day special in McDaid's Pub in Dublin. 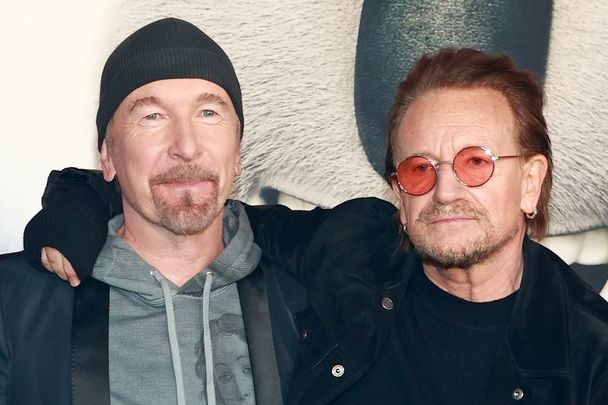 Bono and The Edge recently gave a special performance in McDaid's Pub in Dublin City Centre, which will reportedly feature in Letterman's St. Patrick's Day special about Ireland, set to be screened in the US on March 17.

The U2 members were joined by fellow Irish artists Imelda May, Brian Kennedy, and Glen Hansard for the special session at the Dublin pub.

Letterman's crew also filmed a special performance from Bono and the Edge in front of a select invited audience at the Ambassador Theater in Dublin on December 14.

Letterman has been in Ireland in recent days filming his St. Patrick's Day special, which is due to be released on a US streaming service, according to the Irish Independent.

Irish drag queen Panti Bliss shared a snap with Letterman and said, "He was interviewing me for a documentary, not sure when it’ll be out."

I don’t usually let any Tom, Dick, or Harry into my dressing room, but occasionally I’ll make an exception for a Dave pic.twitter.com/72NyktYoAb

Earlier in his Irish travels, Letterman paid a visit to Badlands Vintage in Dublin, and had the craic with the shop's resident pup:

Letterman also paid a visit to Cavistons in Glasthule, an Irish fish shop that has been in business for more than 75 years, on December 13.

“We had a bit of fun with him this morning, he’s a very nice man," Mark said.

"He just landed out of the blue, sometimes you just don’t know who could come through the door, we heard about an hour before, so we got a bit of notice."

He added: “It was nice to see him, we grew up for years watching his show, you never think that these chaps will be out in Glasthule. I think he was touring the area, so he just popped in."

More recently, he has hosted the Netflix series "My Next Guest Needs No Introduction with David Letterman."

U2, meanwhile, were Letterman's guests several times. In one humorous appearance back in 2009, the lads took part in Letterman's "Top Ten" segment: