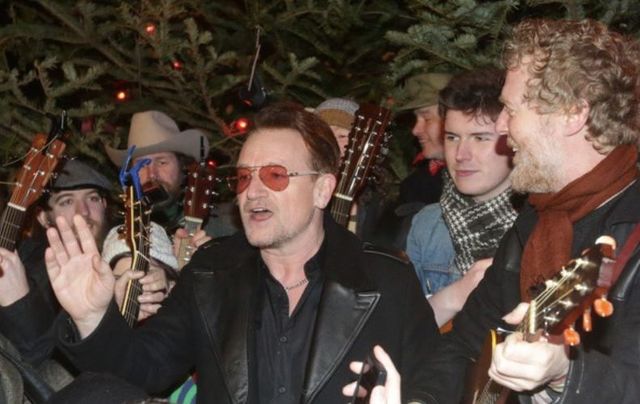 The Christmas Eve busk, which features performances from iconic Irish musicians such as Glen Hansard and Bono, has been a staple in Dublin at Christmas for more than a decade and helps raise much-needed funds for Irish homeless charity the Simon Community.

In the past, artists such as Imelda May, Sinéad O'Connor, and Hozier have performed at the famous event, although it is unknown who is due to take part in this year's Christmas Eve Busk.

Last year, the Christmas busk, which you can watch below, was hosted at St. Patrick's Cathedral in Dublin to accommodate for Covid restrictions:

Ahead of Christmas 2022, the Dublin Simon Community has held a number of fundraisers, including a Sing for Simon event in Dublin City on December 8 and a 24-hour Carolathon in the city center stretching from Friday, December 16 until Saturday, December 1.

Join us at our Carolathon event on Friday the 16th on Grafton Street, where we have wonderful choirs performing from 9am right up until 10:30pm. On Saturday the 17th we will pick back up from 8am at a new location outside of Clery’s on O’Connell Street until 6:30pm💛 pic.twitter.com/dKXpynCNht

Catherine Kenny, CEO of Dublin Simon Community, told the Irish Independent that the charity was seeking to keep people in their homes and out of homelessness over the Christmas period.

"For the sixth month in a row, we have reached the scandalous milestone of the highest number of people ever recorded in homelessness in the capital. The figure stands at 11,397 people in emergency accommodation," Kenny told the Irish Independent.

Aisling Harmey, the Dublin Simon Community's Head of Fundraising and Communications, said the charity is asking the public to "give what they can this Christmas", adding that the charity is to be back in full force for the first time since 2019.

Meanwhile, the Simon Community has released "The Busk", which features once-off performances and collaborations between some of Ireland's most talented musicians - Bono, Glen Hansard, Lisa O'Neill, Damien Rice, and many more.

The record, which runs at 49 minutes and eight seconds, was recorded live over two nights in St. Patrick's Cathedral in December last year at a time when the Dublin Busk could not take place due to the Covid-19 pandemic.

The performances were streamed on YouTube on Christmas Eve, while artists were supported by the Busk choir, consisting of artists, crew, Dublin Simon Community volunteers, and service users who were present at the recording.

The album was released on December 9 and is on sale here for €27.95. All proceeds go to the Simon Community.

The long awaited Busk Record is OUT NOW - https://t.co/pv0KOEQ0pa

What started as a way to keep #TheBusk alive during Covid has now come to life in the form of a beautiful high-quality vinyl record with 14 tracks of pure magic captured at St Patrick's Cathedral. pic.twitter.com/WQetSLWddb