Kushner recalled the incident in "Breaking History", which focuses on his time as Donald Trump's advisor in the White House. 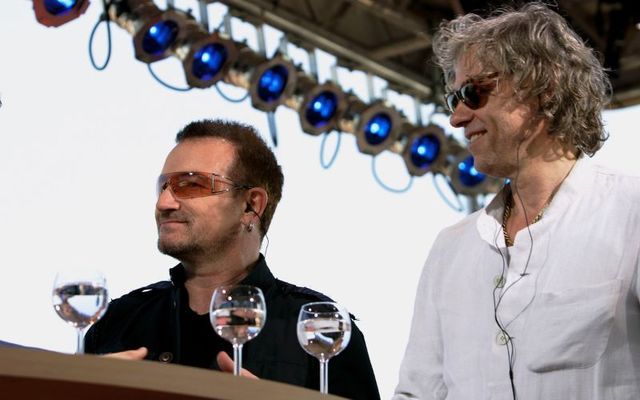 Bono and Bob Geldof perform on stage during the 'Music And Messages' concert on June 7, 2007, in Rostock, Germany. Getty

Irish singers Bono and Bob Geldof once performed a sing-song for Jared Kushner and Ivanka Trump in the French Riviera, according to a snippet from Kushner's newly-released memoir.

Kushner recalled the incident in "Breaking History", which focuses on his time as Donald Trump's advisor in the White House.

In one scene, Kushner recalled attempting to repair a rift in his relationship with Ivanka in the company of Bono, Geldof, Billy Joel, and media tycoon Rupert Murdoch in the French Riviera.

He wrote that Murdoch was in the process of buying the Wall Street Journal at the time, meaning the get-together took place in 2007 or thereabouts.

"On that Sunday, we were having lunch at Bono’s house in the town of Eze on the French Riviera, when Rupert stepped out to take a call. He came back and whispered in my ear, “They blinked, they agreed to our terms, we have The Wall Street Journal.” After lunch, Billy Joel, who had also been with us on the boat, played the piano while Bono sang with the Irish singer-songwriter Bob Geldof," Kushner wrote.

New York Times critic Dwight Garner described the memoir as "soulless" and a "slog", adding that Kushner had displayed a "lack of self-awareness".

Garner also noted that Kushner was someone who "recalls every drop of praise he's ever received" who also claims that he was "unaware of the events" outside the Capitol Building on January 6, 2021, until much later in the day.