Claddagh Records will release "Almost Everything" on September 23, paying tribute to the seminal Irish poet. 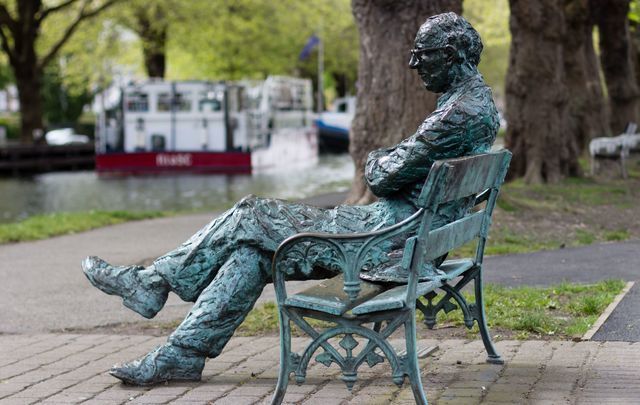 A statue of Patrick Kavanagh on the banks of the Grand Canal, in Dublin. PEIERLS / CREATIVE COMMONS

President of Ireland Michael D. Higgins and U2 frontman Bono are among the esteemed names on a new album bringing the poetry of Patrick Kavanagh to life.

Claddagh Records will release "Almost Everything" on September 23, paying tribute to the seminal Irish poet.

The album was first released in 1964 and featured the only recordings of Kavanagh reading his most celebrated poems.

It has now been remastered and reimagined into a two-part album, with one part consisting of Kavanagh's readings and the other consisting of some of Ireland's most famous figures reading 15 different poems.

Bono has become the latest artist to take on Kavanagh's most widely-known poem, "On Raglan Road", which became embedded in Irish culture after Luke Kelly converted it into a classic ballad set to the traditional song "the Dawning of the Day".

Higgins, meanwhile, has provided a reading of "Stony Grey Soil".

All physical copies of the album will be accompanied by a booklet that includes Kavanagh's poetry, while the vinyl format features two unique and exclusive vinyl sleeves.

The first sleeve is a printed collage of sketches of all the celebrated readers around Kavanagh with the poet himself visible through a gold-foil cut-off square on the cover itself.

The second sleeve is an exact replica of the original album cover that was released in 1963.