Bill Murray and golfing author Tom Coyne are filming on golf courses around Ireland for their new series "The Links Life." 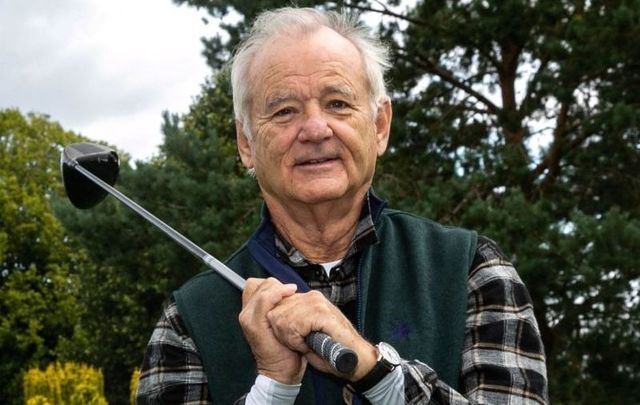 Bill Murray is visiting Ireland this week – filming a new season of a golf series called "The Links Life". The golf travel documentary will air on YouTube and other major streaming platforms and will highlight some of Ireland's top golf courses.

Famously a lover of golf, this is not the first time, of course, that Murray has teed off in Ireland. Murray's brother, Joel, once told the Chicago Tribune that the pair enjoyed a memorable trip to Ireland where they reprised their Second City schtick at a comedy festival in Kilkenny.

His brother said they "were paid in golf, basically," adding that they "rode about in a Land Cruiser, picking up girls and taking them to their hostels, going from bar to restaurant to bar."

Of course, with a name like "Murray", we can be sure that the beloved comedic actor has Irish roots. Murray grew up in Wilmette, Illinois, as part of a large Irish Catholic family. His father's father emigrated from County Cork, while his mother's family hails from County Galway.

However, during a 2009 trip to Ireland Murray grumbled that "no one has ever claimed me in Ireland. No one!"

Murray's co-host on "The Links Life" is Tom Coyne, a fellow Irish American who recently released his newest book "A Course Called America: Fifty States, Five Thousand Fairways, and the Search for the Great American Golf Course", an account of an unforgettable year searching for the quintessential American golf course.

Coyne is also no stranger to Ireland's golf courses having released his book "A Course Called Ireland" in 2009, described as a four-month journey across Irish golf courses "search of a country, a pint, and the next tee".

Not only did Coyne take on 55 golf courses along the Irish coast over the four-month spell, but he also walked the distance between each one, covering more than 1,100 miles on foot.

Coyne told IrishCentral: "It was a wonderful way of living and a wonderful four months in Ireland. My whole world was on my back. I had a very simple plan - walk, golf, eat, sleep.

"I was in this beautiful country surrounded by these great people. It was a very nice way to live."

While Ireland is already famous for its illustrious golf courses, the country's tourism boards, Tourism Ireland and Fáilte Ireland, are delighted that Murray and Coyne are filming in Ireland.

Niall Gibbons, Chief Executive of Tourism Ireland, said: “We are delighted to support the filming of 'The Links Life' featuring Bill Murray. It is a really great way to showcase Ireland and some of our top golf courses.

"Our aim is to remind viewers that Ireland offers some of the very best golf in the world, as well as spectacular scenery and fantastic experiences. The episodes filmed here will help ensure that Ireland stays ‘top of mind’ among golfers in the US and elsewhere around the world.”