From U2 to the traditional classics, here is IrishCentral's playlist for the best Irish music from the movies. 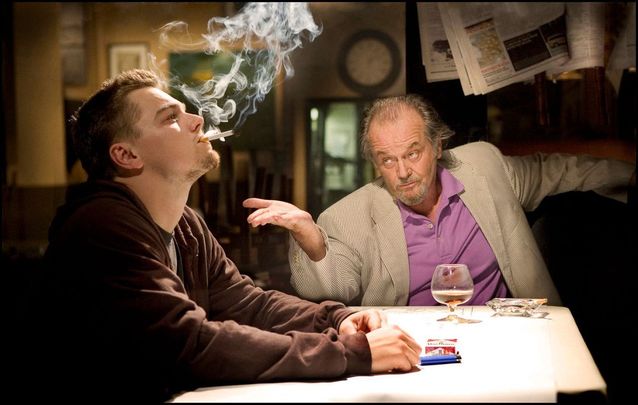 Leonardo Di Caprio and Jack Nicholson in The Departed.

The Irish are the biggest cinema-goers in Europe and the Irish are also world-renowned for their musical talent.

The Departed (2006) - Shipping Up To Boston, by The Dropkick Murphys

The Dropkick Murphy’s are an American Irish Celtic Punk band and their song “Shipping Up to Boson” featured heavily in The Departed. You can't deny that his song will get your blood pumping and continues to be used often in soundtracks and at Fighting Irish events.

This Oscar-winner song has become truly iconic along with the beautiful feel-good movie. This John Carney directed indie-movie, starring Hansard and  ‎Markéta Irglová is a modern Irish classic.

Killing Bono is a comedy movie, based on the memoir of Neil McCormick and it will have you on the ground laughing. As the title suggests U2 features heavily. The movie stars Ben Barnes and Irish star Robert Sheehan alongside Pete Postlethwaite, who sadly died three months before its release.

Starring Saoirse Ronan, this romantic historic drama, based on the novel by Colm Toibín was internationally massive. One scene and song stands out for us and that's the performance of Iarla Ó Lionáird, who plays Frankie Doran, a poor workingman who sings the traditional song "Casadh an tSúgáin" (Twisting the Rope) during Christmas dinner at a soup kitchen.  We think you'll agree it is stunning.

Wind that Shakes the Barley (2006) - Óró, sé do bheatha 'bhaile (welcome home), performed by The Dubliners

The Wind That Shakes the Barley is a 2006 war drama film directed by Ken Loach, set during the Irish War of Independence (1919–1921) and the Irish Civil War (1922–1923). This beloved and harrowing move features the traditional Irish song which came to be known as a rebel song.

Michael Collins is a 1996 biographical period drama film written and directed by Neil Jordan and starring Liam Neeson as Michael Collins, the Irish patriot and revolutionary who died in the Irish Civil War.

The name of this particularly moving song is a transliteration of the Irish "mo chuisle", meaning "my pulse" as used in the phrase a chuisle mo chroí, which means "pulse of my heart".

While the Ben Affleck movie wasn't among the critic's favorites this song, Arsonist's Lullaby, by Wicklow man Hozier was a great choice. The moving track even provided a dramatic backdrop to the movie's trailer.

Check out our Spotify playlist of the best Irish music from the movies: