Barry Keoghan may have lost out at the Golden Globes for his role in "The Banshees of Inisherin," but the Irish star still celebrated a great night with Hollywood's finest. 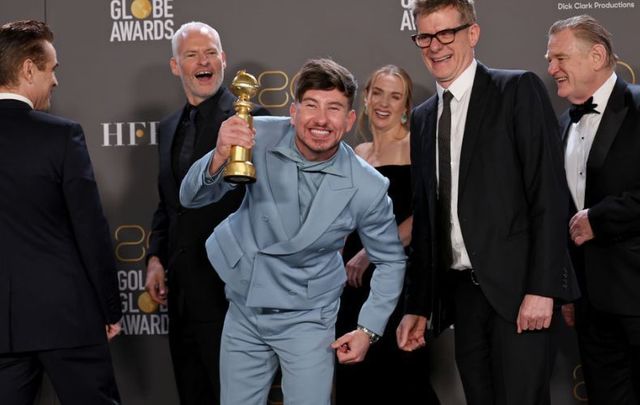 "The Banshees of Inisherin" cast pose in the press room during the 80th Annual Golden Globe Awards on January 10, 2023, after winning the Best Picture - Musical/Comedy category. Getty

Barry Keoghan didn’t win a Golden Globe last week, but the "Banshees of Inisherin" star had a helluva time anyway, dressed to the nines in baby blue Louis Vuitton and hanging with stars like Jamie Lee Curtis.

Keoghan was up for Best Supporting Actor, which went to Ke Huy Quan for "Everything Everywhere All at Once," but "Banshees" did great otherwise, scooping three major awards and planting itself as a firm Oscar favorite. (Academy noms are due on Tuesday, January 24.)

It’s a pretty good night when you run into the one and only Jamie Lee Curtis among others.

Keoghan and Curtis were together on the red carpet and exchanged a kiss and a hug, and their name signs for the photos.

Barry Keoghan gets a kiss from Jamie Lee Curtis at the #GoldenGlobes. https://t.co/uRzGEpFqpS pic.twitter.com/54FsEDEaZa

“Fe**in legend Jamie,” Keoghan remarked on his Instagram after meeting the star.

Later in the night, Farrell gave Keoghan a cute shout-out during his acceptance speech for winning Best Actor:

“I have already WON with you,” he replied. Awwwww…..

Farrell won his award, and also got something he didn’t want…Covid-19. So did co-star Brendan Gleeson, which prevented both from attending the Critics’ Choice on Sunday.