"One of the best actors of his generation" 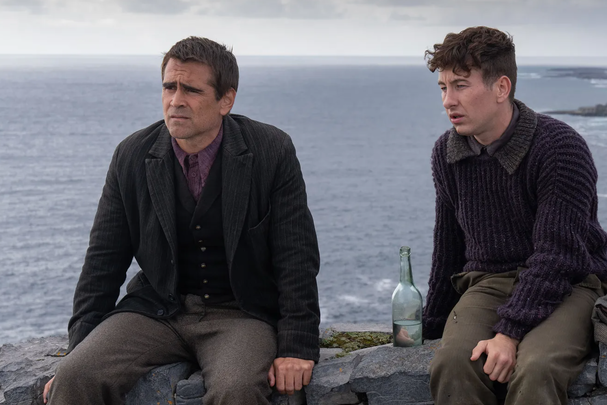 Coiln Farrell and Barry Keoghan in "The Banshee of Inisherin".

GQ magazine – the U.K. version – has a fabulous interview with man of the moment Barry Keoghan, the Dublin-born actor and new dad who’s built a quite remarkable life for himself, considering that his father was absentee and his poor mother died from a drug overdose when he was only 12.

Barry opened up to GQ about his childhood and how he was determined not to become a cliché.  His passion for acting was his ticket out of deprivation, and look where his determination brought him – a featured role in the new Martin McDonagh hit "The Banshees of Inisherin," a starring role in "Salthill", the upcoming thriller from Oscar winner Emerald Fennell, and the best role of all, Dad to a new baby boy, Brando, with his partner Alyson Sandro, an orthodontist from Scotland who he met in February of 2021 in London.

Alyson wasn’t one bit impressed when Barry told her he was an actor, and didn’t care about his selfies with pals like Angelina Jolie.  “He was saying he plays a superhero in a film. I went, ‘Who, Spider-Man?’” Sandro told GQ.

They’ve been together ever since and welcomed Brando in August. Barry is determined to give his newborn all the things he didn’t have growing up.

“It’s indescribable,” he said. “It’s a love I’ve not felt before.  You can learn from how you were raised.  I have the chance to do the things that weren’t done for me.”

Only 29, Barry seems to have an evolved sense of fame and its drawbacks.  “You hate the parties,” Alyson said in a conversation with Barry and the GQ reporter. And he agreed, calling fame “a world build on artificial things and fake promises and bulls***.”

The A-listers who’ve worked with Barry think the sky is the limit for him.  McDonagh couldn’t be more effusive. “Barry’s one of the best actors of his generation in the world today, let alone in Ireland, and it’s always a better move to cast the best rather than cast to type,” he said.

Once he wraps shooting Salthill, Barry and his new family will move to somewhere on the Scottish east coast, to be close to Alyson’s people.  He told GQ that he brings a stuffed toy everywhere with him – it used to belong to his late mom.

“When I’m happiest, I feel like she’s with us,” he says. “Wherever that teddy is, or wherever Alyson or my boy is…that’s home for me now.”