Ann Skelly’s star continues to rise with “Death and Nightingales”

Irish actress Ann Skelly is making big waves as she takes on her first lead role in "Death and Nightingales" alongside Jamie Dornan. 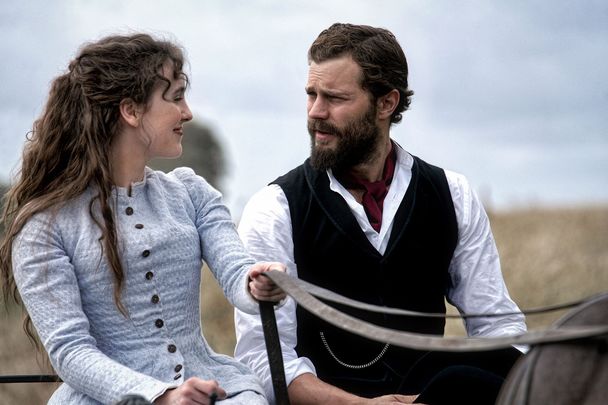 Ann Skelly and Jamie Dornan in “Death and Nightingales”

‘Tis the season for Ann Skelly. The 24-year-old Irish actress, Dublin-born and raised in Wexford, is starring in the HBO Max series The Nevers, and on Sunday, fans got a chance to see her in Death and Nightingales, a three-part miniseries that debuted on the Starz network.

Death and Nightingales, which also stars Irish actor Jamie Dornan, was actually filmed in 2018 and has already aired on Irish broadcaster RTE and the BBC as well.

The show is based on a novel by Eugene McCabe, and the plot goes like this: “Set in the countryside of Ireland in 1883, the story follows a young woman, Beth Winters (Ann Skelly), and her struggle to control her own destiny.

"On her 23rd birthday, she decides to escape her limited life and difficult relationship with her landowner stepfather, Billy (Matthew Rhys), with the aid of the charming Liam Ward (Jamie Dornan).”

Skelly says working with her co-stars was a pleasure. “It was my first time being the lead of a series, and it was an extremely intimidating set to come work on,” she told the New York Post.

“I was one of the few women in the show, and when there’s movie stars like Jamie Dornan and Matthew Rhys…with all their experience that they have, it was overwhelming. But it was such a relaxed experience. And as I look back now, I was a 21-year-old (at the time of filming) acting alongside such giants. I can’t believe I felt so comfortable, but I did.”

Her goal was always to become an actress, and she’s clearly succeeding pretty well. In a recent chat with The Irish Times, Ann said that formal schooling was never really her thing.

“Everything was so focused on marks, and I knew I wasn’t going to college anyway,” she said. “I felt school wasn’t about the learning experience. It was about the Victorian institutions and the systems that are still in place.

“But I enjoyed languages, and we’d all be curious people at home. I did a social anthropology course over lockdown, simply because I’m interested in it. But it’s not for any end goal or purpose, it’s just genuine interest.”

Even though she’s only 24, Ann seems to have her head firmly on her shoulders, especially when it comes to stardom.

“If anything good was to come of the pandemic, it’s hopefully a sense of perspective, so I’m hoping that we’ve all had enough of celebrity culture,” she said.

“I feel we got pretty tired of famous people telling us to enjoy the time from their mansion in Beverly Hills or whatever.”

Death and Nightingales is available now on STARZ and streaming services.