"An Irish Goodbye," a black comedy set in rural Northern Ireland, has made the shortlist for the Live Action Short Film category at the 95th Academy Awards. 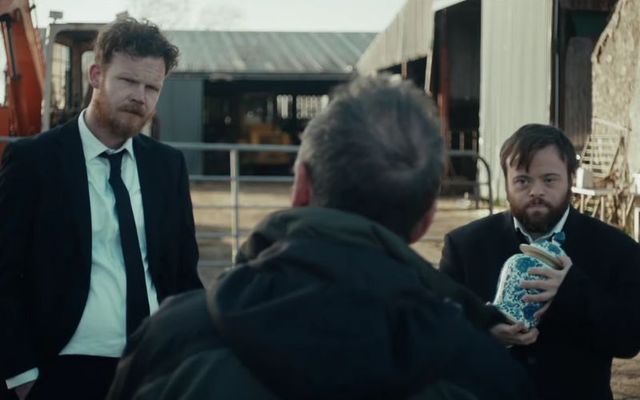 "An Irish Goodbye," filmed in Co Antrim, is one of 15 short films that have been selected out of 200 for the Live Action Short Film shortlist at this year's 95th Academy Awards.

The Academy of Motion Pictures will choose between three and five short films to go forward and compete at the Oscars in March. The nominations will be announced on January 24.

"An Irish Goodbye" isn't the only Irish film on an Oscars shortlist this year - "The Quiet Girl" ("An Cailín Ciúin") made the cut in the Best International Feature Film category, while "The Banshees of Inisherin" is on the Music (Original Score) shortlist.

We are absolutely delighted to be one of 15 films shortlisted for Best Live Action Short Film at #Oscars95@TheAcademy https://t.co/Msfb41lXua

Set against the backdrop of a working farm in rural Northern Ireland, “An Irish Goodbye” is a black comedy following the reunion of estranged brothers Turlough and Lorcan following the untimely death of their mother.

Under the watchful eye of odd-ball parish priest Father O’Shea, the brothers’ pained reunion is worsened by the fact Turlough must now make new care arrangements for Lorcan, who has Down Syndrome. A robust and dedicated farmer, Lorcan’s dream of continuing to work the land he grew up on is thwarted when Turlough decides he’s sending him to live with their Aunt on the other side of Ireland.

But when the brothers discover an unfulfilled bucket list belonging to their late mother, Lorcan senses an opportunity: he’ll only agree to leave the farm once he and Turlough have themselves completed every single wish on their mother’s list…all one hundred of them.

“The whole team is absolutely overwhelmed that ‘An Irish Goodbye’ has been recognised by the Academy in this way," the film's writers and directors Tom Berkeley and Ross White commented.

"It’s completely surreal to think that a wee film shot in Templepatrick is now rubbing shoulders with our cinematic heroes on an international stage.

"Only time can tell how far we will go, but we’re honoured to be representing the UK & Ireland in the category.

"We cannot wait to introduce the film to a wider audience – thank you to everyone who has supported us in the journey so far!”

Richard Williams, Chief Executive, Northern Ireland Screen, said: “We are incredibly proud of Tom and Ross and all the talented crew that made this wonderful short film. Special mention must also go to James who is an inspiration to so many and his starring role can only encourage more people from diverse backgrounds to follow their dreams and consider opportunities within the screen industry.

“To make it onto the Oscar shortlist is no mean feat, with strong competition from all around the world. We wish the team every success as they continue on their Oscar journey and we hope that we’ll be celebrating again on 24th January when nominees are announced.”

“An Irish Goodbye” is the second short film from duo Tom Berkeley and Ross White and is produced by Floodlight Pictures with support from Northern Ireland Screen and BFI.

The nominations for the 95th Academy Awards will be announced on Tuesday, January 24, while the Oscars ceremony will be held on Sunday, March 12 at the Dolby® Theatre at Ovation Hollywood and will be televised live on ABC and in more than 200 territories worldwide.

You can watch the trailer for "An Irish Goodbye" here: