It's Always Sunny in Philadelphia is back for its record-breaking Season 15 on December 1, and The Gang is set to take on Ireland. 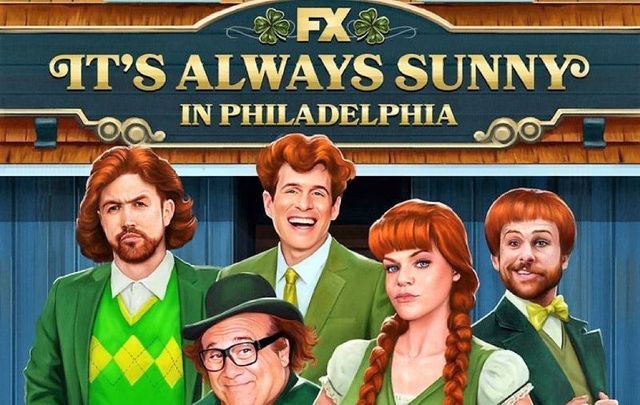 The Gang is looking a wee bit Irish in the promo poster for Season 15 of It's Always Sunny in Philadelphia. @alwayssunny, Twitter

It’s Always Sunny in Philadelphia is set to return with its highly-anticipated Season 15 this December 1, and it looks like The Gang is leaning into their Irish roots.

The official Twitter account for the cult hit show shared a poster today, November 3, for the upcoming season 15 that shows cartoon caricatures of The Gang decked out in a bit o’ green and topped off with red locks:

Some of the show’s stars - Rob McElhenney, Kaitlin Olson, Charlie Day, and Glenn Howerton - also shared the season 15 teaser pic on their personal social feeds, with each post quickly racking up tens of thousands of likes.

Here is the synopsis for Season 15 of It's Always Sunny in Philadelphia, according to Collider:

The record-breaking 15th season of It’s Always Sunny in Philadelphia is its most ambitious yet. In the seismic wake of Covid-19 and all things 2020, The Gang stands at a crossroads in this strange new world. The rules are changing quicker than anyone can keep up with, despite herculean efforts from “Mac” (Rob McElhenney), “Charlie” (Charlie Day), “Dennis” (Glenn Howerton), “Dee” (Kaitlin Olson) and “Frank” (Danny DeVito) to continue business as usual. Now, they must face the music and decide who they’ll become in the cultural upheaval that is 2021. Across the span of eight episodes — and the Atlantic Ocean — we find them answer in a way only they could think to.

Like a fine Irish whiskey, Sunny’s distinct flavor has gotten richer and intensified through the years. First barreled in 2005, the show has become a landmark for dark comedy and American satire, uniting the most devoted of fans from all over the country and abroad, and this monumental 15th season is truly one to crack open and celebrate.

Continuing to deliver some of the hardest laughs on television while tackling society’s most pressing issues, Sunny turns its fearless focus both outward and inward: to a national and international level but also to a deeply personal level. This is a season that sees The Gang try to exploit pandemic aid, sidestep cancel culture, evade criminal justice, reflect on their origins, and reconcile their identities and homeland roots."

It's unclear as of yet whether plotlines of It's Always Sunny in Philadelphia's Season 15 actually take place in Ireland. Maybe someone in The Gang is having some sort of deranged Irish dream, or maybe they're retelling their Irish ancestors' stories, similar to the 'The Gang Cracks the Liberty Bell' episode - anything's possible on this show.

What we do know, however, is that some filming took place in Ireland in recent months.

Back in August, MovieExtras.ie posted a casting call which read: “Urgent - Danny DeVito Double needed for Its Always Sunny in Philadelphia.

“Yes, It’s Always Sunny in Philadelphia are coming to Ireland! And we need a Danny DeVito Double.

“Shooting is this Sunday 29th Aug and the location is Dublin."

In the weeks after the Irish casting call was posted, the show’s cast began sharing pictures from what could only be Ireland on their social media feeds.

Though they didn’t explicitly say where they were, both Olson and McElhenney, who are married in real life, added shamrock emojis into their captions on Instagram which may have been snapped at the Cliffs of Moher in Co Clare.

The show, which began airing on FX in the US in 2005 and now runs on FXX, has become the longest-running live-action comedy series in American television history.