A golden week for Saoirse Ronan, next stop the Oscars

New York Film Critics, Golden Globes, and Palm Springs International Film Society... an Oscar must be the next spot? Saoirse certainly is the favorite at this point. 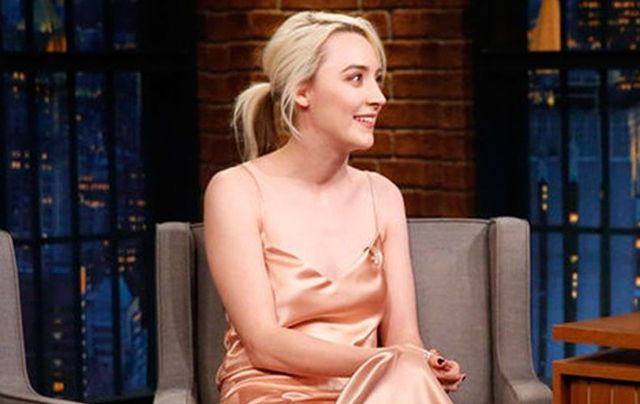 New York Film Critics, Golden Globes, and Palm Springs International Film Society awards... an Oscar must be the next spot? Saoirse certainly is the favorite at this point

What a week it was for Saoirse Ronan, capped on Sunday night with her first Golden Globe win for Lady Bird, the film that’s placed her front and center this awards season.

Before she took to the stage to collect her Globe – clad in a stunning black Versace gown – the 23-year-old budding superstar picked up a couple of other trophies as well.  On Wednesday she was in NYC to accept the Best Actress award from the New York Film Critics Circle; a day before that, she did the same at the Palm Springs International Film Society.

Can Oscar be far behind?  Saoirse certainly is the favorite at this point, and her chances will be boosted if she can score another win at the Screen Actors Guild honors later this month.

But…Frances McDormand, who never fails to disappoint, was a GG winner on Sunday too for Martin McDonagh’s film, Three Billboards Outside Ebbing, Missouri – as was writer/director McDonagh himself, English-born son of Irish parents who spent loads of time in Ireland growing up and based his best-known, Tony Award winning plays there.

Then there’s Margot Robbie, who plays the infamous Tonya Harding in the critical darling I, Tonya.  The Aussie, who stars with Saoirse in the upcoming Mary, Queen of Scots, earned rave reviews for her portrayal, and also gave a new lease on life to Harding herself who was front and center at the Golden Globes ceremony. (Who says crime doesn’t pay!)

It will be interesting to see how it all plays out…we’re predicting Saoirse will emerge on top as she’s been nominated for Oscars twice already, has assembled an outstanding body of work – more than Robbie – and McDormand already won a Best Actress Oscar for the unforgettable Fargo back in 1997.

And, let’s face it, this is the year of the WOMAN in Hollywood.  Lady Bird was written and directed by Greta Gerwig and tells a touching tale about the struggle between moms and daughters.  How can it lose?

Hopefully Saoirse’s mother Monica, and father Paul will be in LA if that happens.  (Her BFF Eileen was with her on Sunday.) Monica was back in Ireland when the Globes were on, and someone from Saoirse’s table FaceTimed so she could see her daughter give her acceptance speech.