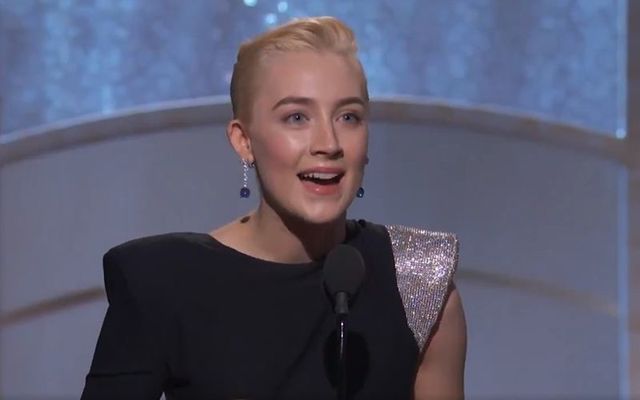 The Irish won big at the 2018 Golden Globes Awards, in Beverly Hills, on Sunday evening, with Saoirse Ronan winning Best Actress – Musical or Comedy for her role in “Lady Bird” and writer-director Martin McDonagh’s “Three Billboards Outside Ebbing, Missouri” winning four awards including Best Movie – Drama. Sadly, Catriona Balfe, who has now been nominated for three Golden Globes, failed to nab the prize for her role in the TV series “Outlander”.

The Irish star delighted the crowd as she began her acceptance speech by saying "Thank you! My mam is on FaceTime over there on someone's phone right now, so hi!"

It was Ronan's third Golden Globe nomination - she was previously nominated in 2008 for Atonement and in 2016 for Brooklyn - and her first win.

In the Greta Gerwig-directed movie, Ronan plays Catherine "Lady Bird" McPherson, a high school senior coming of age in Sacramento, California, in 2002 and navigating her close and turbulent relationship with her mother.

Martin McDonagh's “Three Billboards Outside Ebbing, Missouri” was one of the biggest successes of the night, nominated for six awards, it won four including Best Motion Picture – Drama. In what seems to be a theme for the Irish McDonagh began his speech with a shout out to his Mammy.

He said "It's my mum's birthday tomorrow; she likes this kind of thing… So happy birthday, mum - even though I think she wanted Lady Bird to win!"

However, McDonagh lost out on the Best Director award to “The Shape of Water's” helm Guillermo del Toro.

There was disappointment for the Irish star of “Outlander” Caitriona Balfe who lost out in the Best Actress in a TV Series - Drama category to “The Handmaid's Tale's” Elisabeth Moss. However, the Irish star revealed had other matters to celebrate on the night as she revealed she’s engaged!

Among the other big winners on the night were Gary Oldman who won Best Actor - Drama for his portrayal of Winston Churchill in World War II biopic “Darkest Hour”.

Allison Janney won Best Supporting Actress for her portrayal of LaVona Golden, the mother of disgraced figure skater Tonya Harding, in “I, Tonya”.

Actor-director James Franco was the Best Actor - Musical or Comedy winner for his film, “The Disaster Artist”.

“Big Little Lies” was the big winner in the TV categories with four awards, including one for Nicole Kidman.

Were you surprised by any of the winners (or speeches) during the Golden Globes? Who would you have liked to see win? Let us know in the comments section below.

Here’s some highlights from the night: