Mission on to save Dublin's legendary Cobblestone Pub

There are only a few days remaining to lodge objections to a request for planning permission that could threaten The Cobblestone Pub in Dublin. 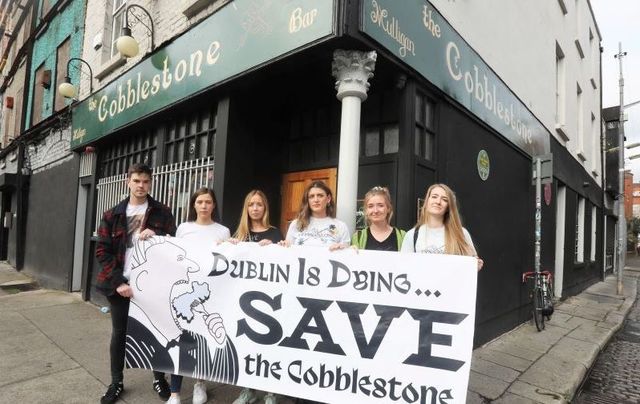 October 9, 2021: Protesters with Meabh Mulligan with a placard outside of The Cobblestone Pub in Dublin during a protest to save the pub. RollingNews.ie

“Ring a ring a rosie, as the light declines.
I remember Dublin City in the rare ould times.”  - Rare Ould Times by Pete St. John

We have all heard and sung this refrain countless times decrying the changes that have been wrought in Ireland’s capital city over the years, especially as the early days of the Celtic Tiger set off a real estate boom that gave rise to cranes all around making a city out of the town.

No question that an awful lot of good came out of that progress as Ireland steadily advanced to the prosperous identity it enjoins now among the world’s nations. But sometimes that progress can come at a steep price, and I am not talking about more mundane construction costs here.

Earlier this month, the Irish music community learned of a planning application on North King Street atop Smithfield Square that just happens to contain one of the most popular traditional music pubs in Dublin known as The Cobblestone.

Since 1988, Tom Mulligan and his family have operated the hardscrabble sanctuary there that featured a street-front bar with one of the more famous corners ever to host a wide array of traditional musicians in a series of sessions that could sometimes be as many as four a day on weekends.

Along with serious music aficionados, you would see tourists from everywhere crammed into the narrow bar from front to back taking in the scene of the venue that had a well-deserved reputation for the best of music and hospitality.

The back bar primarily served as a function space for concerts and CD launches and dance classes and could hold around 80 people in its black box environs. Like the front bar, it was THE place to meet up with friends and musical fellow travelers whether you were local or an intermittent visitor like myself who always found time to pop into The Cobblestone.

News trickled out earlier this month that an application had been lodged with the Dublin City Council by Marron Estates Ltd. to build a nine-story hotel with 114 rooms over and around the smaller footprint of the Cobblestone Pub. The planning indicated 70 percent of the current space including the back bar, smoking area, and some upstairs rooms used for classes in the premises would be taken over and reworked into the new hotel property. The small front bar which is a protected structure could remain operating on the hotel’s ground floor.

An immediate hue and cry sprung up from the music community in Dublin and on the internet, and a protest and march from Smithfield Square to the Dublin Council headquarters less than a mile away across the Liffey was held on a Saturday.  Petitions were passed around and official objections lodged with the council to forestall these plans which in all likelihood would remove one of Dublin’s cultural hubs and genuine music venues from a practical trading place subsumed inside yet another hotel. 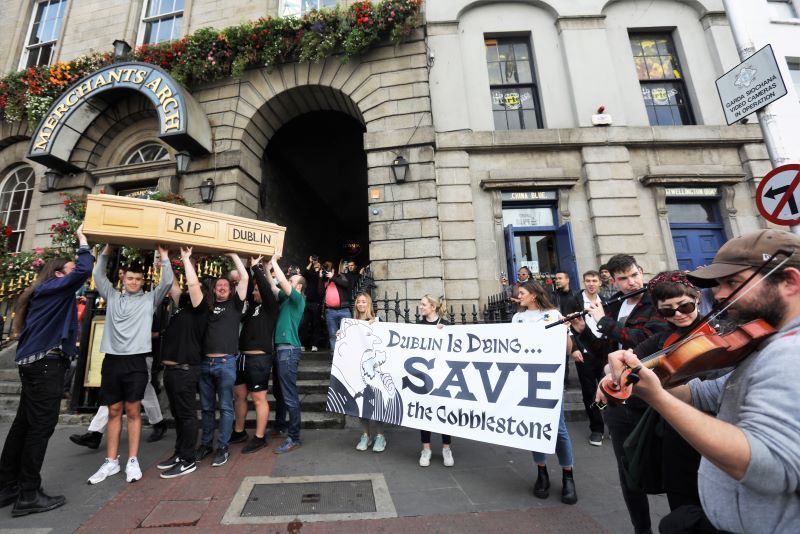 March in Dublin to save the Cobblestone Pub. (RollingNews.ie)

November 4 is the last day for objections to be made, with Green Party MEP Ciaran Cuffe stating, “The Cobblestone has been at the heart of Dublin’s thriving live music scene since the last century, and it would be a shame to see it engulfed by a modern hotel that would inevitably alter its character.”

This is a real grass-roots battle with David (Cobblestone and its fans) battling Goliath (Dublin City Council and real estate interests) that will be fought on the streets of Dublin. Unfortunately, while The Cobblestone is recognized as an important traditional music venue beating in the heart of Dublin’s cultural heritage, it does so without government supports or protection and is fighting this corner only with the people who value its existence.

Here’s hoping there is a workable compromise in the future for that small but important corner of Smithfield Square.