Plans to replace for Merchant's Arch the Cobblestone pub have received widespread criticism from Dubliners. 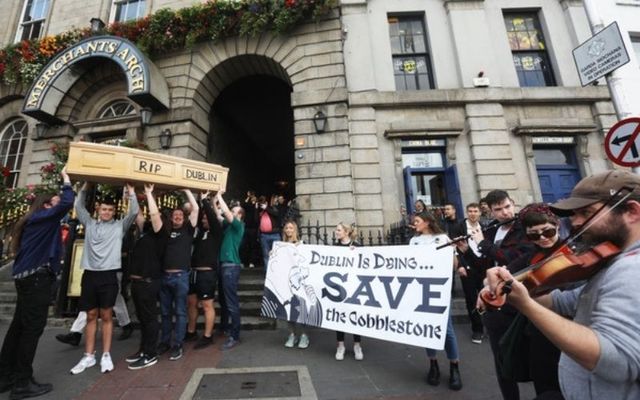 Protesters carry a coffin with the words "RIP Dublin" inscribed on it at Merchant's Arch in Temple Bar. Rolling News

Hundreds of people gathered in Dublin City on Saturday afternoon to protest against planned hotel developments at Merchant's Arch in Temple Bar and the Cobblestone pub in Smithfield.

Recent plans to replace independent retailers at Merchant's Arch with a boutique hotel and the iconic Cobblestone pub with a nine-story hotel have received widespread criticism from Dublin locals, who condemned the proliferation of hotels in the city.

Hundreds of demonstrators gathered in Smithfield on Saturday afternoon to protest the development of a nine-story hotel around the Cobblestone pub, which is a protected structure.

The planning application states that the Cobblestone will be retained as part of any development, but management at the bar fear that it will result in the demolition of the outdoor area and the back of the venue, reducing the pub's capacity to just 50 customers and essentially converting it into a de facto residents' bar.

Manager Tomás Mulligan attended Saturday's protest and told the Irish Times that he was "furious" with the proposed development.

"They want to gut the beer garden, the back bar, and the area to the side...we’re going to lose 70 percent of our operational area. It’s going to starve us out of this building. We won’t be able to feasibly operate," Mulligan told the Irish Times.

"I think people are just sick of this stuff. This is killing Dublin, this erection of mindless concrete. We don’t need a hotel, we’ve got one right across the road that you can get a room in any time you want."

The Cobblestone is one of Dublin's most popular pubs and is well known for its traditional Irish music scene.

More than 25,000 people have signed a petition opposing the development since the petition was launched on Thursday.

After the demonstration at the Cobblestone, the protesters carried a coffin with the words "RIP Dublin" inscribed upon it across the Ha'penny Bridge to Merchant's Arch to protest against the planned development of a boutique hotel in the famous laneway.

The proposed development will result in the demolition of several independent retailers to make way for a new four-story hotel and restaurant.

The protest concluded at the Dublin City Council offices at Wood Quay.

Eoghan Ó Ceannabháin, who launched the petition opposing the development at the Cobblestone, told the Irish Times that Dublin residents were angry at the destruction of cultural hotspots in the city.

"I think a lot of people are very angry over the lack of democracy in how the city is planned. We’ve obviously got a massive housing problem and we’re building hotels left, right, and center, and we’re also destroying cultural and historical sites in the process."

He said that the proposed developments would further "suck the life" out of Dublin City.