A review of "Douglas Hyde: My American Journey" which is translated from Irish to English for the first time. 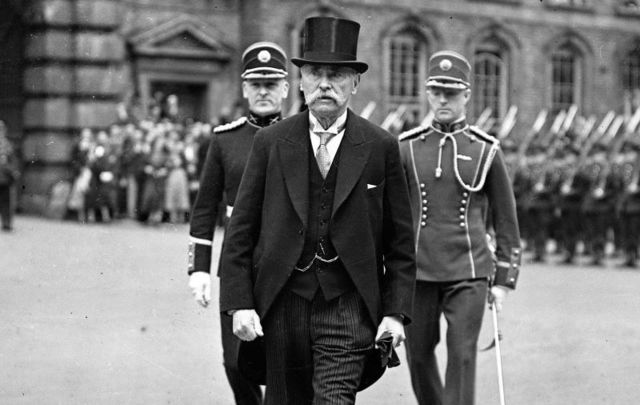 Dr Douglas Hyde after being sworn in as the nation's first President of Eire on June 25,1938 Getty Images

America has played an outsized and often unheralded role in the preservation of the Irish language.

You read that right. Irish language classes in New York in the 1890s inspired Ireland's first president and Gaelic League co-founder Douglas Hyde to work tirelessly to ensure that our national language would continue to be spoken.

Read More: Honoring how America helped the survival of the Irish language

He had his work cut out. The Ireland of the turn of the last century was depleted and shell shocked and in James Joyce's words “paralyzed.” The Irish people had lived through the near-extinction event of the Great Hunger, the greatest social disaster in Europe in the 19 century, and then the erosion of their language by the national schools, with the population still decimated by the calamity.

Against this moribund backdrop in 1905 Hyde made a seven-month fundraising trip through the United States from 1905 to 1906, raising 12,400 pounds from his series of sold-out speaking events. His task was simple, to restore what was almost lost.

In "Douglas Hyde, My American Journey" his Irish language account of the eight-month trip (originally published in 1937) has been translated into English for the first time by the editors, with help from illuminating illustrations and photographs culled from the period to help bring his trip to life.

Read More: Watch celebrations in Ireland as The Republic of Ireland Act came into effect

Hyde's focus was remarkable. At every stage of his journey, regardless of where he was or what political expediences prevailed, his message stayed consistent. His famous 1892 lecture on the necessity of de-anglicizing Ireland would be his life's work.

Hyde was of one of that singular generation of the Anglo Irish that just preceded the Irish revolution, the type who fell hard for the culture that his ancestors had rejected. The son of a Church of Ireland clergyman, he grew up in County Roscommon where he learned the Irish language from the local people and where it became his lifelong passion.

After studying theology at Trinity College in Dublin, he was offered a lecturing post at the University of New Brunswick in Canada where he spent the academic year before traveling on to Boston and New York on his way back to Ireland.

It turned out to be a life-changing trip. It was America's many Irish language classes that first showed him how he might pursue his national ambition at home.

A surprise for many people reading this book will be the sheer number of Irish speaking people who lived here around the turn of the last century and whom he encountered. Now for the first time in English, you can read about his efforts, which yielded political as well as cultural change.

By the turn of the century, there were some 600 Gaelic League branches all over Ireland and up to 250,000 people taking language lessons. Hyde's league was reviving not just their heritage but their self-determination.

This invaluable book gives you an insight into what drove him and how his efforts resonated across continents.