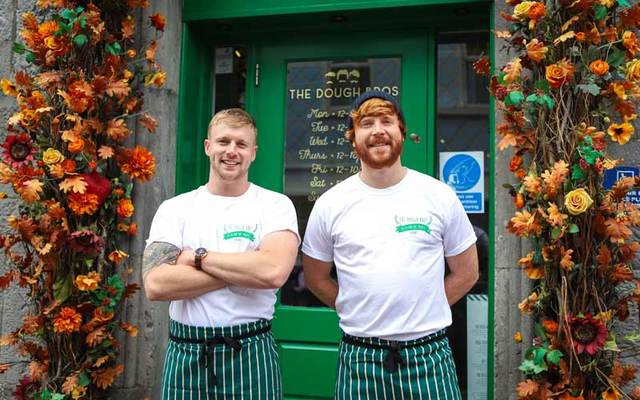 Ronan and Eugene Greaney, who run The Dough Bros in Galway City.

The Dough Bros, a pizzeria in Galway City run by two Irish brothers, has been named in the Top 50 Best Pizzerias in Europe.

The list honor the best pizzerias in Europe outside of Italy.

Ranking number 21, The Dough Bros, owned by Eugene and Ronan Greaney, was one of two pizzerias in Ireland named on the list. (Cirillo’s of Dublin was also recognized.)

The Dough Bros win marks the first time the west of Ireland has been featured on the prestigious list.

The Greaney brothers opened The Dough Bros, which started in a pizza truck, in 2013. Their wood-fired pizza is inspired by Naples but uses the best of Irish cheese, charcuterie, and honey to create something distinctly unique and local.

“The '50 Top Pizza Guide’ to the Best Pizzerias in the World' is like the pizza world’s Michelin Guide,” said Eugene.

“We were visited unannounced at our restaurant on Middle Street, upon that visit we were unknowingly judged on the pizza, the ingredients, the execution of the cooking etc but also the standard of service, experience, beer and wine list.”

“The awards are based on pure merit and are judged by the best, from Naples, Italy, who travelled the length and breadth of Europe to find the Top 50.”

Eugene and Ronan learned in February that their pizzeria had been visited. The brothers later heard the news they made it on the top 50 list. They normally would have traveled to Milan to receive their award, but because of the COVID-19 lockdown this year, the award ceremony was live streamed.

“This was surreal. We were all in different houses and away from each other so even though we were over the moon about our Top 50 news, we really didn’t feel it as we were apart and in the midst of this pandemic, it was almost like it didn’t seem real,” said Eugene.

“We were all naturally devastated not to be traveling to Milan, to meet our peers and to experience this brilliant moment for us, our families and our business. But we decided we would not let the big night pass us by. We were adamant to mark this massive international award with those that have been there from the start.”

❤️🇪🇺 TOP 50 PIZZERIAS IN EUROPE. THE DOUGH BROS OF GALWAY NAMED NO 21 ❤️🇪🇺 Today we should be in Milan in an old historic building, slicked out in a Tux, picking up our Award for being named in the TOP 50 PIZZERIAS in EUROPE. What a night that would have been but covid put a halt to that like so much else. Of course that's a massive shame but there are a lot worse things going on. The night and the achievement will not pass us by. The Tuxes were going on regardless and we we are gonna mark the occasion in style with our family and loved ones.. When we opened the Pop Up on Abbey gate Street there were 8 people serving pizzas on the one street. You can only imagine how many hundreds of thousands there are in Europe. To be named in the top 50, let alone No 21,is some feeling. Thank you to every person that has helped us along the way, in particular to our staff who has given their all to help us achieve this huge milestone. We will Enjoy tonight and tomorrow get planning on how we get to no 1 over the next few years. Much Love ❤️🍕 The bros x

The Dough Bros created their own black tie formal event in their family home  as they tuned in online to watch the awards ceremony.

“In the end it worked out the exact way it was supposed to. Instead of being in Milan, we were at our home house, where it all began with the food truck, with family and loved ones who all helped us make it in the early days. Just seven years ago we were in a food truck at farmers markets, so to see our name called at number 21 in Europe was a feeling and a night we will never forget,” said the brothers.

During the pandemic, The Dough Bros have  had to adapt their business, developing DIY Pizza kits that people could order online to make their own pizzas at home.

Their pizza is available at O’Connell’s Bar in Eyre Square Galway and their restaurant on Middle Street has recently reopened for business after the shutdown.