Residents at Falcarragh Community Hospital lined up at the hospital's windows to watch Daniel O'Donnell perform a mini-concert from the hospital grounds. 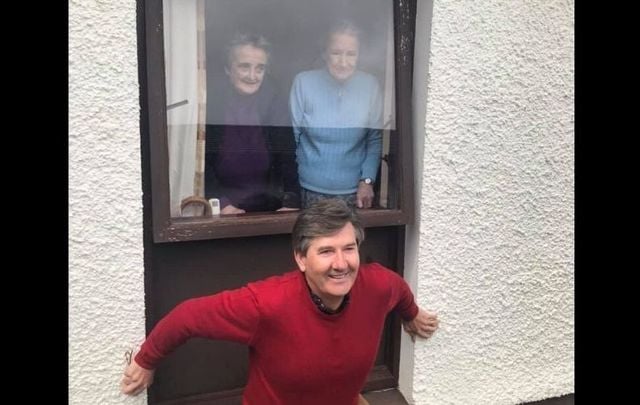 Residents at Falcarragh Community Hospital lined up at the hospital's windows to watch O'Donnell perform a mini-concert from the hospital grounds.

O'Donnell was filmed singing 40 Shades of Green, a song about Ireland written by Johnny Cash, by Ani O'Donnell, a staff member at the community hospital.

O'Donnell performed the mini-concert from a safe and social distance in the hospital grounds, making use of a portable sound system.

The residents were simply delighted and joined O'Donnell to sing the finale of "40 Shades of Green."

The Irish music star chatted to the residents through the windows during his performance, asking how they were getting on during the COVID-19 pandemic.

"Are yous all well?" O'Donnell asked as he roamed by a window. "Good on yous."

This is so special. Ireland does not deserve Daniel O’Donnell. 💚

Staff and residents alike gave O'Donnell a rousing round of applause after his performance, which must have come as a special treat for residents who have been cocooning for almost two months.

Ani O'Donnell took to Facebook to thank the Irish singer for providing the Falcarragh residents with a few hours of joy.

"On behalf of all the residents & staff in Falcarragh Community Hospital, we would like to say a massive thank you to the one and only Daniel O’Donnell. Words can not express the joy you brought to the residents this afternoon," she wrote.

On behalf of all the residents & staff in Falcarragh Community Hospital, we would like to say a massive thank you to the...

Daniel O'Donnell is extremely popular among Irish people of a certain age bracket and is known to be extremely close with his fanbase.

This is not the first nursing home he has performed at since the COVID-19 pandemic isolated elderly residents from their families and he has also sung for patients in care homes in Gweedore and Dungloe.

Speaking on Ireland AM, O'Donnell explained why he was so keen to perform in care homes across Donegal.

"Sure it passes the time for me, takes nothing out of me, and gives a wee bit of a change of atmosphere to those people who are in the hospitals and various places."