Co. Laois and Co. Offaly battle it out while raising awareness about heart failure. 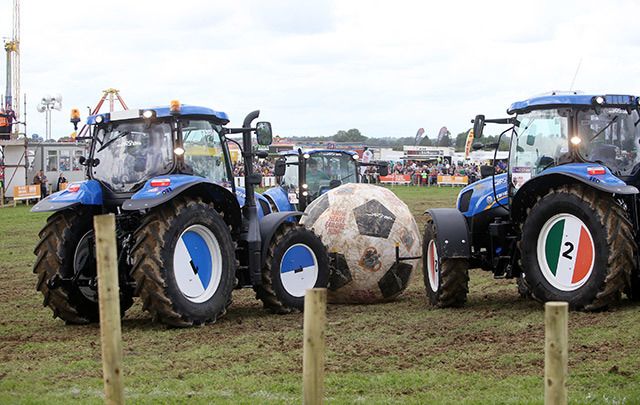 Ireland’s National Ploughing Championships might sound like an unusual enough event to those not familiar with the 85-year-old tradition, but this year at the championships, an even more unusual spectacle stole the show.

Commentators voices soared over the excited crowds and whirring engines as three-a-side teams from Laois and Offaly battled it out over a seven-foot ball in the incredible new sport of tractor football.

The event, developed as part of an initiative to raise awareness about heart failure, saw two teams climb into their vehicles once an hour over the three-day festival to remind farmers to look after their hearts just as well as they look after their machinery.

Two opponents face off in a game of tractor football at the Ploughing Championships 2016.

“You’ll service your car every year, but you won’t go to a doctor once a year to get a check-up for your heart,” referee Arthur O’Connor told TheJournal.ie.

“The main idea of this today was to sponsor ‘Know Your Heart.’”

Close to a goal at the Ploughing Championship 2016 tractor football tournament.

With set rules including no reversing, no offside rule, allowing the ‘attacking’ tractor right of way, and not moving in front of any other tractor, the drivers displayed some fantastic skills as they weaved around the muddy field, while O’Connor kept an eye out for fouls from his watchtower on the sidelines.

This may be one of the only places you’ll see a Co. Offaly men’s team score as many goals in 2016!

For those of you who weren’t fortunate enough to grow up in the Irish Midlands and didn’t enjoy your annual day off school to go to “the Ploughing,” the Championships are one of Europe’s largest agricultural events, this year drawing in a record attendance of 283,000 people.

Now in its 85th year, the event took place in Tullamore. Co. Offaly over three days this September, even welcoming Olympic rowing silver medalists (& celebrities) Gary and Paul Donovan to what organizers claimed was the most successful event ever.

And tractor football was not the only highlight. Not only could you work on your milking technique at the Milking Academy and explore new farming inventions such as the Sheep Spa, but there were fashion shows, sheep-shearing displays, dancing and plenty more to keep everybody entertained.