"The Quiet Man" stars Maureen O'Hara and John Wayne are featured in the newest collector's item from Euro Note Souvenir. 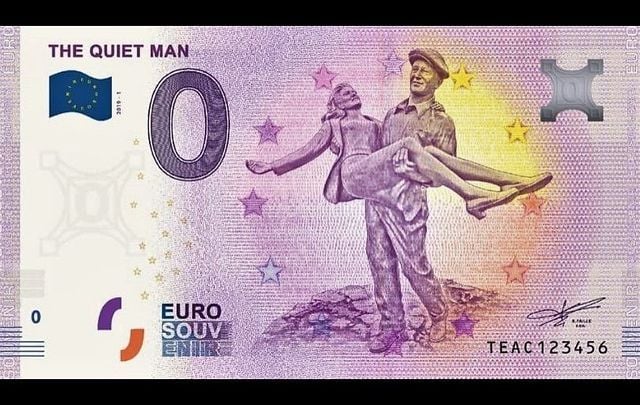 “The Quiet Man,” the beloved 1952 film which helped forever shape the world’s view of Ireland, is being memorialized in a new €0 note released by Euro Note Souvenir.

The iconic image of John Wayne as Sean Thornton scooping up Maureen O'Hara as MaryKate Danaher is featured on the front of the collector's item, the newest in a series of Irish-themed collectibles from Euro Note Souvenir.

The souvenir note has been officially licensed by the European Central Bank and is printed by Oberthur, the French facility that prints the Euro.

It has the look and feel of a Euro, along with a watermark, holographic protection, and UV-responsive tactile marks. Only 5,000 copies of the note are being produced.

Read More: WATCH: Behind-the-scenes photos from the filming of The Quiet Man

Peter Schneider, the Managing Director at Euro Note Souvenir, says: “‘The Quiet Man’ gave people all over the world the chance to fall in love with Ireland.

“We believe creating a note that immortalizes that moment will delight collectors and movie buffs all over the world. With travel restricted due to the coronavirus, fans of the film won’t get to come visit in person right away, so we hope this note can be the next best thing.”

Euro Note Souvenir has several other Ireland-centric designs, including The Cliffs of Moher, Titanic, the Foynes Flying Boats, among others.

Euro Note Souvenir is the exclusive license-holder for zero-euro banknotes in Ireland. These popular souvenir notes have the look and feel of real money, and are printed in the same facility in France that produces real Euro banknotes. More information is available on their website.