Six-year-old hurler with cerebral palsy is an inspiration 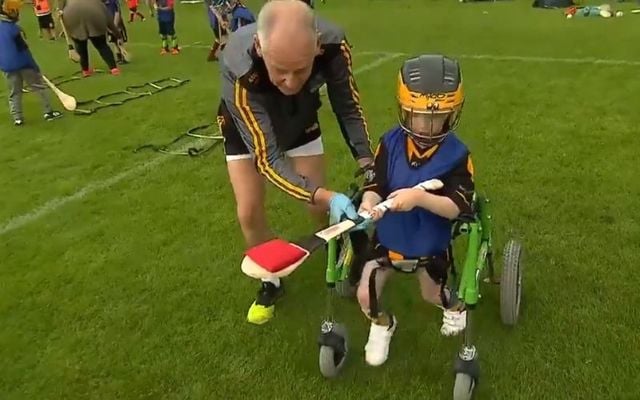 Aaron Hill Harnett is an inspiration to everyone. RTÉ GAA Twitter

An inspiring six-year-old hurler from County Kildare suffering from cerebral palsy is proving that disabilities are not a barrier to playing sports.

Aaron Hill Harnett turned six just a week ago and has trained with Round Towers GAA in County Kildare on several occasions since training resumed following the coronavirus lockdown.

The six-year-old is able to overcome his disability by using a special wheeler designed by Liam Hackett, an engineering technician involved at the club.

Hackett said that, while the wheeler is important in allowing Aaron to take part, it would be almost useless without the youngster's determination and desire.

"In fairness to Aaron, he gives 110%, and that's what makes it work," Hackett told RTÉ News.

Aaron's parents are delighted that their son can take part in outdoor games after previously believing that he wouldn't be able to make the transition from indoor sports hall to outdoor pitches.

However, the special wheeler has enabled that transition, much to the delight of Aaron's dad Liam Harnett.

"The real benefit for Aaron is that he gets to play with his friends," Liam Harnett said. "We were here last Monday and Aaron came with this [wheeler] and it was brilliant. There was a bit of tear to my eye, but I was so proud and so grateful."

Meanwhile, Aaron's mother Donna Hill said that she never thought that her son would be able to play hurling outdoor with his friends.

"I initially thought; how is he going to play that sort of a game? How is he going to hold a hurl? But the volunteers were brilliant, everybody was helping him out. There was such a good community buzz. We couldn't not bring him back."

Aaron Hill Harnett has taught everyone at the club that obstacles can be overcome, Round Towers said.