Dubliner Erica Fleming shared an image of her unusual fry on Twitter, sending Irish Twitter into meltdown with what she described as "runny pudding". 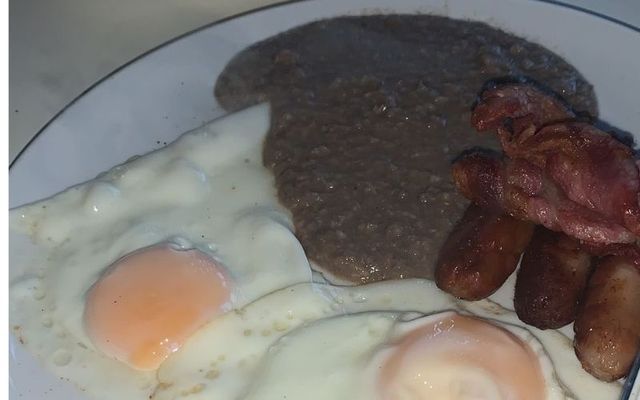 An Irish woman has sent Twitter into meltdown with her picture of an Irish fry, including runny white pudding.

Dubliner Erica Fleming shared an image of her fry on Twitter on December 7 alongside the caption: "Nothing like a fry for dinner while the wind howls outside".

Nothing like a fry for dinner while the wind howls outside #stormbarra pic.twitter.com/Q8lJCfnPoF

However, Irish Twitter users were quick to spot one anomaly with  Fleming's fry - a gray concoction that looked something like beans.

"Woah woah woah what on earth is that brown stuff???" a Twitter user said in response to Fleming's tweet.

Dozens of others posted similar questions, prompting Fleming to explain that the "brown stuff" was actually white pudding cut into slices and boiled in water.

"Cut a half ring of white pudding into slices, throw it into a pot with a small sup of water, stir it until it comes to the boil and wallah, you have runny pudding," Fleming explained.

The recipe triggered a wave of shocked replies from people who were scandalized by the concept of runny pudding.

Several Twitter users described the recipe as a "hate crime", while other Dubliners were quick to distance themselves from the concept.

"Grew up on coddle, rissoles and tripe and onion soup but I have never heard of this travesty!" One Dubliner said.

"Defamatory against Dubs. I've never seen anything like that," said another.

In an interview with RTÉ Radio's Ray D'Arcy, Fleming revealed that she learned the recipe from her grandmother and said that she believed that runny white pudding was a "Dublin thing".

She confessed that runny white pudding "doesn't look appetizing" when it's in the pot but said that the final result is a tasty addition to a standard Irish fry.