Neighbors in Ringsend, Co Dublin joined together in a rousing choreographed dance to Whigfield's "Saturday Night" while maintaining social distancing. 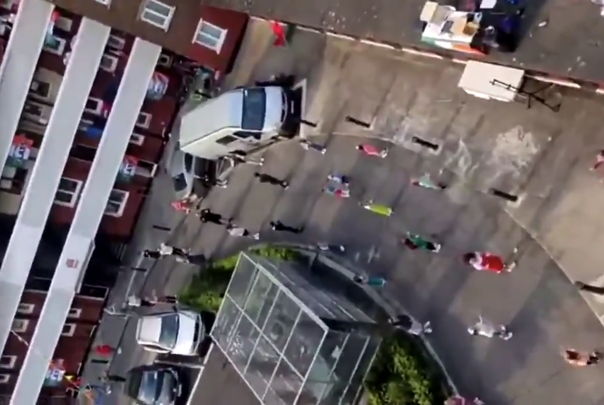 The Ringsend community is finding different ways to endure the lockdown. @ConorMurray_18 Twitter

Neighbors in Ringsend, Co Dublin have gone viral after they were captured line dancing to Whigifeld's "Saturday Night" while maintaining social distancing

Residents in the Ringsend Flats in south Dublin let their hair down for a couple of minutes and danced in almost perfect unison to Whigfield's 1994 smash hit "Saturday Night." Fittingly, the viral dance took place on a Saturday night on April 25.

Read more: How one Dublin pub is staying busy during the COVID-19 lockdown

Residents even marked in chalk where people where to stand during the memorable dance and left at least eight feet between each dancer.

The video has been viewed more than 1.4 million times since it was posted on Sunday morning and has been liked nearly 50,000 times.

There are a number of Irish flags visible in the background and one flag hilariously appears to say "yup the flats."

Most of the reaction has been overwhelmingly positive and the majority of social media users claim that it gave them a lift.

"Each dancer's place marked out too. Class act. Well done The Flats!" One Twitter user wrote.

"These events give me goosies and hope beyond measure. Thank you for sharing," another wrote.

Some adopted a sterner attitude towards the dancing, claiming that the community could not possibly observe social distancing even if they were staying eight feet apart.

"Not very clever to be honest! That's far from Social distancing & very irresponsible. People need to cop on," one disgruntled Twitter user said.

This is not the first time that the Ringsend Flats have gone viral during COVID-19 lockdown.

Ringsend residents also went viral in March when they played "balcony bingo" with prizes like Easter eggs and toilet paper.

Whigfield's "Saturday Night" is a staple tune in most Irish nightclubs and the song rose to prominence again in 2018 when it appeared in a memorable scene in Derry Girls.

The song has widely been used in line dancing for decades and the dance moves are synonymous with the '90s.