Scottish singer-songwriter Paolo Nutini gladly accepted a pint of Guinness at his recent Limerick gig from a fan who "thought he was lookin a bit thirsty." 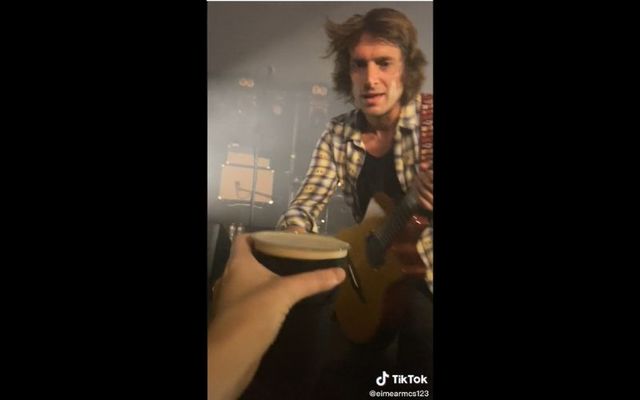 Paolo Nutini treated to a pint of Guinness during his recent gig at The Milk Market in Co Limerick. Eimear McShane, TikTok

Paolo Nutini was treated to a pint of Guinness from a fan midway through his show at The Milk Market in Limerick last week.

Nutini, the 35-year-old singer from Scotland famous for his hit "New Shoes," played sold-out gigs in Dublin and Limerick this month in support of his new album "Last Night in the Bittersweet."

However, it might have been his Limerick fans who made the best impression after one offered up a pint of Guinness to him during his gig at The Milk Market.

In a video shared by Irish woman Eimear McShane on TikTok, Nutini gladly accepts the pint of Guinness from a fan in the crowd.

"Go on, Paolo!" a fan shouts encouragingly while Nutini leans over to grab the pint with his guitar still in hand.

The crowd erupts in cheers as he takes the pint with a friendly nod. Nutini then made his way back to the microphone stand, raised his pint to his fans, and told them: "Now this is my kind of crowd."

McShane captioned her TikTok video: "Thought he was lookin a bit thirsty."

“This is class," one person wrote on McShane's TikTok. "I’m absolutely sickened that I couldn’t get tickets."

Another wrote: “Legend. He obviously needed that," to which Eimear replied: "No man more deserving of a pint!"

"Folk were on top of each other's shoulders... it was great. We had to then go to the brewery to the top floor, that's where we finished the night on a belly of the velvety beast."