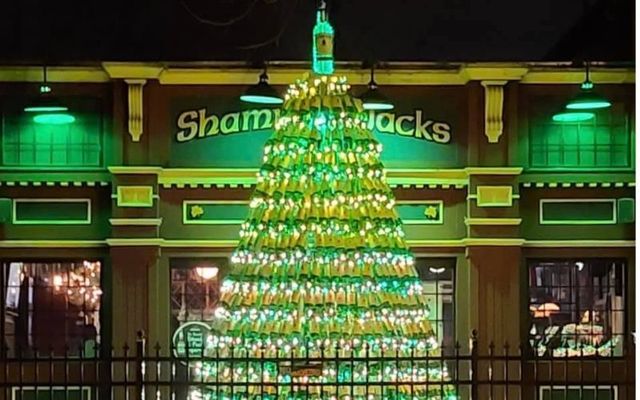 In 2020, while grieving the loss of their manager, Shamrock Jack's Irish pub decided to realize her dream by creating a Christmas tree inspired by the Dublin whiskey distillery.

Following the loss of a beloved staff member in Shamrock Jack's Irish pub, in Irondequoit, New York, created something magical for the holiday season a Christmas tree, made from 800 empty Jameson Irish whiskey bottles.

The family-owned pub created this festival masterpiece following the sudden death of their staff member, Roz Hickey. Manager, Mark Petzing, the son of the owner Cathy Petzing, explained that Hickey, who'd worked at Shamrock Jack's was a jack of all trades and was heavily involved in decor.

Petzing told the Democrat and Chronicle, “Anything you see in this place, she’s touched... She always had a paintbrush in her hand. We called it Roz-ifying.”

During a vacation to Ireland, Hickey had been inspired by the chandelier that hangs in the foyer of the Jameson distillery in Smithfield, Dublin. Hickey and bartender Brittany Brown started to collect bottles and this year they'd gathered 800.

Following Hickey's death, her colleagues thought they might put the project aside but Petzing pointed out that Hickey "would always give us a kick in the butt." They asked themselves, "What would Roz do?" The answer was to go forward.

Brown stepped up to lead the way. Her boyfriend, Kevin Bullis, who owns Bullis Construction, did most of the work, creating a wood-and-wire tree-shaped frame to hold the bottles.

The tree measures 15 feet tall and encircled by a railing and is illuminated by a green floodlight and string lights.

“People have been driving by, honking their horns and stopping to take pictures or to come in to say, ‘This is amazing.’ It puts you right back in the spirit. For the first time in a while, we feel like we’re moving forward.”

We’re officially ready for the holidays! Our first Jameson Tree dedicated to Roz❤️ Special thanks to Kevin at Bullis...