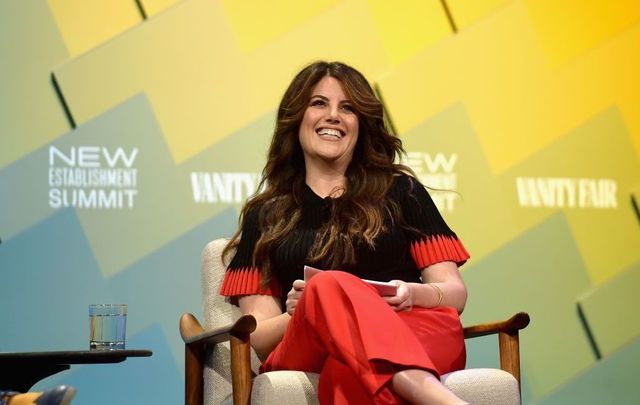 Monica Lewinsky is in Dublin to deliver the keynote speech at an HR conference and apparently, she already has our accent nailed.

Welcome to Dublin, Monica Lewinsky! As well as enjoying our delicious Irish butter, the 45-year-old has been using her time in the Irish capital to brush up on her Irish accent and she reckons that she's pretty much there already.

The anti-bullying activist joked on Twitter how the "h" had already been eradicated from her speech after "t" because really and truly, most of Ireland just don't believe in it.

Lewinsky, a social activist and public speaker, is in Dublin this week as she delivered the keynote speech at a human resources conference The Talent Summit on Wednesday evening.

An anti-bullying activist, consultant, and Contributing Editor to Vanity Fair, she has become an advocate for a safer and more compassionate social media environment, drawing from her unique experiences at the epicenter of the Clinton affair media frenzy back in 1998.

"As the world of technology catapulted her into a world of intense scrutiny, bringing the uninvited attention of the world upon her for all the wrong reasons, it was the compassion of those around her, coupled with personal resilience, that brought her back from the edge.

‘I am probably the only person over 40 who doesn’t want to be 22 again,’ @MonicaLewinsky told a Dublin audience (via @IrishTimesLife) https://t.co/E99N868r8b

"Reflecting the theme of this year's Talent Summit, it's the human element that has enabled Monica to lead change through her social activism and create a global anti-cyberbullying revolution.

"Never before has technology played a bigger role in the workplace."

Lewinsky addressed her emergence as an anti-bully advocate during her talk stating: "We have words now for what happened me then.

“Today we call it cyber-bullying, slut-shaming and online harassment. I have been asked the question a lot: ‘Why now, why did I stick my head up over the parapet again? Because it was time. It was time to stop and to take back my narrative.

“You can survive shame. You can insist on a different ending to your story.”

During her half-hour speech, Lewinsky also showed off her Irish research comparing the number of clicks that various articles received to the population of different Irish counties as she addressed the topic of clickbait.

All we can say is that we're very jealous of her breakfast this morning.

What is your favorite trait of the Irish accent? Let us know in the comments section, below.