Meet Babe, the Galway pig that thinks it’s a dog

Babe the pig plays fetch, goes for walks on his lead and loves to have his tummy rubbed. 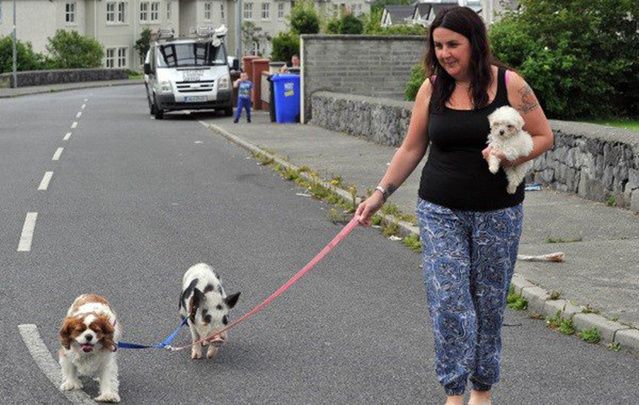 Babe the pig plays fetch, goes for walks on his lead and loves to have his tummy rubbed. Facebook

Babe, the nine-month old micro pig, was everything his owner Deirdre O’Donnell had always wanted.

She had dreamed of owning a pet pig since she was young, but she had never been able to see her hope come to fruition while she lived in New York. However, a move to Tuam, Co. Galway, left her with more than enough space to finally find her very own prized pig.

O’Donnell has learned that Babe may have aspirations of his own, however, not unlike those of his namesake, the fictional Babe the sheepdog. O’Donnell’s micro-pig thinks he’s a dog.

When she got Babe, O’Donnell already owned a King Charles spaniel named Ze Ze, and the pooch and piglet became the best of friends. They now even go on walks together sharing a joint lead and will often play a game of fetch.

“Babe’s best friend is Ze Ze, and I take them both for walks on a double lead, even though we rarely go through the town as I get stopped so often by people who want to pet him or take photos that I never get very far,” O’Donnell told the Irish Examiner.

“He definitely believes he’s a dog and will chase after a ball if I throw it. He’s also quite fond of the squeaky toys I got for Ze Ze.”

O’Donnell’s partner Kevin had not been so sure about Babe when she revealed her lifelong dream of owning a pig. It took months of pleading to convince him that his home wasn’t about to be turned into a pigsty.

“I finally convinced Kevin when I assured him that a micro pig only grows to a certain size,” Deirdre said.

When Babe first trotted into their lives, however, things didn’t go exactly to plan. As pigs do, the latest addition to the O’Donnell motley crew of pets rooted around the house with his nose, destroying some of the furniture. Their garden wasn’t spared either after Babe was left outside. And things were getting worse when a vet recommended placing a metal ring in the pig’s nose to stop him from rooting.

Babe only has to wear the ring for six months. It seems to be working its magic already, although this may be somewhat due to the fact that Babe lives up to that other pig stereotype (despite his canine traits) – Babe is extremely lazy.

“He does live up to his reputation though in that he’s quite lazy,” O’Donnell told the Examiner.

Along with his best pal Ze Ze, the pig has now become an essential part of the O’Donnell family of pets, which also includes latest addition Sean, a Maltipoo puppy just twelve weeks old; and a kitten named Pebbles.

“I wouldn’t be without him now and having gone so long wanting a pig, I never thought having one would be as good as it is.

“He’s part of the family now and we wouldn’t have it any other way.”