The poster for Maureen O'Hara and John Wayne's 1963 film "McLintock!" has been compared to "Fifty Shades of Grey." 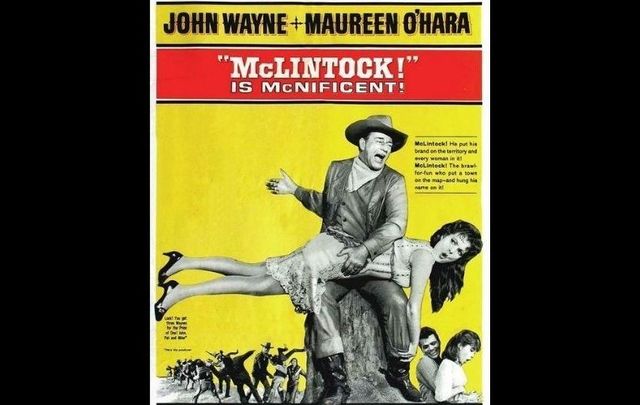 “McLintock!” starred western legend John Wayne and Maureen O’Hara, who had previously captured the hearts of audiences in "The Quiet Man," and the poster for the film has been compared to the book-turned-movie series "Fifty Shades of Grey," written by E.L. James.

The vintage poster depicts a scene in “McLintock!” in which Wayne’s character, cattle-rancher McLintock, settles scores with his estranged wife Katherine, played by O'Hara, by spanking her in front of a crowd.

It wasn't the first time the duo got into a tussle on the big screen. Earlier, in "The Quiet Man," Wayne and O'Hara played out the infamous "dragging scene," in which Mary Kate Danaher, O’Hara’s character, is forcibly pulled through the fields by Sean Thornton, Wayne's character.

The movie poster for "McLintock", signed by Wayne's son Michael who also produced the film, was auctioned by Whyte's in Dublin in 2015.

At the time, Stuart Purcell of Whyte’s said: “The poster gives a fascinating look at the differences between social attitudes at the beginning of the 1960s and today.

"In the time of Fifty Shades of Grey, the main image of the poster has an entirely different connotation than it did then!”

Despite the fact that a film such as “Fifty Shades of Grey” would have been unthinkable for 1960s Ireland, the poster depicts a set-up that would draw up completely different connotations in this post-"Fifty Shades" era than it would have at the release of “McLintock!”

You can check out the Maureen O'Hara and John Wayne scene from "McLintock!" that gave way to the now famous movie poster here: