WATCH: Man bravely conquers his fear of heights on the Aran Islands

In this hilarious and sweet video, one man conquers his fear of heights to catch a glimpse of the breathtaking Atlantic Ocean from atop the Aran Islands. 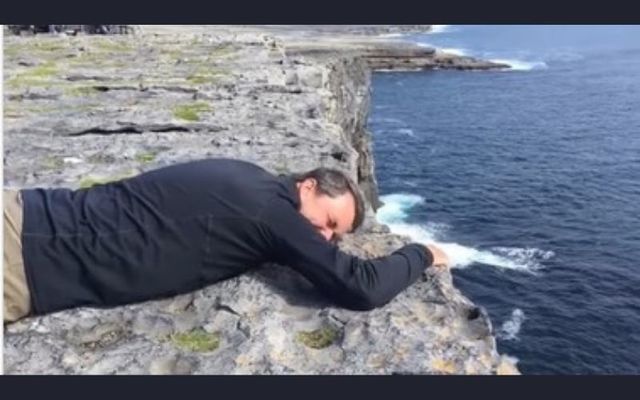 This man wasn't going to let his fear of heights stop him from seeing the view of the Atlantic Ocean from the Aran Islands!

An American man on vacation in Ireland was determined to catch a glimpse of the breathtaking Atlantic Ocean despite his crippling fear of heights.

The hilarious and sweet video, originally titled "Dad faces some demons," was first uploaded to YouTube back in 2017 with the caption "My dad won't let a crippling fear of heights keep him from peering over the edge. Well maybe."

After battling motion sickness during the ferry journey to Dún Aonghasa on the island of Inis Mór, part of the Aran Islands off the coast of Co Galway, the intrepid explorer has one final challenge ahead of him - to look out from the top of the cliffs to the Atlantic Ocean.

Despite being terrified, the man slowly gets himself to the edge, with some encouragement from his wife, while fellow tourists stroll around in the background, seemingly unfazed by the heights.

"You got to hold it for five seconds, of uninterrupted eye contact with the Atlantic Ocean", encourages his wife while the man bravely holds his head up and looks side to side at the incredible views.

While the video is a few years old, it has been making the rounds online again in recent days after it was featured on @TanksGoodNews on Instagram:

Viewers in the comment section praised the man for facing his fear with many saying they would have struggled too.

"Good for him! Not an easy thing to do when you have that big of a fear of it. But I bet he thought it was worth it in the end once he saw it," commented one user.

However, some others who also experience fear of heights wrote that the video made them feel anxious!

"This made my palms sweat" and "I’ve been [here] and it’s terrifying so I feel this man’s pain," shared others.