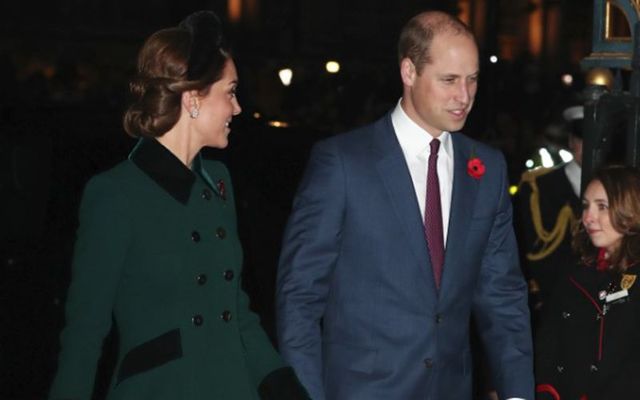 Kate Middleton, the Duchess of Cambridge and Prince William’s wife, wore the dark green Catherine Walker dress she wore on St. Patrick’s Day 2018 to the Armistice Day service at Westminster Abbey, in London, for the 100th anniversary.

Middleton, whose family can be traced back to Brian Boru in Ireland, wore her emerald green coat dress with a velvet collar, along with a fuzzy headband with statement studs.

The Duchess work the same emerald green coat dress on St. Patrick’s Day 2018 when Kate Middleton and Prince William honored the Irish Guards, a regiment of the British Army. Three-hundred-and-fifty troops led by the mascot, Irish Wolfhound Domhnall, marched out for the couple. Kate handed sprigs of shamrock to officers and warrant officers.

On Saturday evening, on Remembrance Day, Kate was joined at Westminster by Prince William, Meghan Markle, Prince Harry, the Queen, Prince Charles, and Camilla, among other senior members of the royal family.

This weekend, when the world celebrates and mourns the massive loss of life in the brutal World War I, the Royal Family has had a very busy time.

Here’s a live feed of London’s memorial at the cenotaph on Armistice Day: