And our favorite Irish Wolfhound Domhnall was back for the annual ceremony! 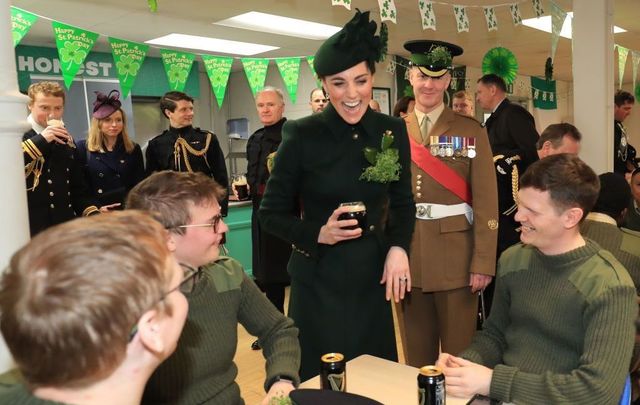 The Duke and Duchess of Cambridge got into the St Patrick's Day spirit at the annual event celebrating the Irish Guards.

In what has weirdly become one of our favorite St Patrick's Day traditions (simply because of the adorable Irish wolfhound Domhnall), Prince William and Kate Middleton were today on Guinness duty as they honored the Irish Guards. 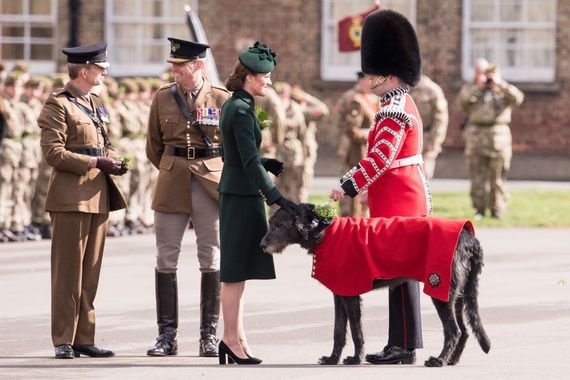 Held every March 17, the royal couple visited Parade Square at Cavalry Barracks where 350 soldiers from the Guards marched, led by their mascot, Domhnall.

The pair then guzzled down a pint of the black stuff to continue the celebrations.

Wiliam, Duke of Cambridge and Catherine, Duchess of Cambridge meets with Irish Guards after attending the St Patrick's Day parade at Cavalry Barracks in Hounslow, where they presented shamrock to officers and guardsmen of 1st Battalion the Irish Guards on March 17, 2019 in Hounslow, England. (Photo by Gareth Fuller - WPA Pool/Getty Images)

While the Duke wore his customary uniform, the Duchess sported a forest green Alexander McQueen coat that she topped with a matching fascinator. She also pinned a beautiful shamrock pendant to her left shoulder. 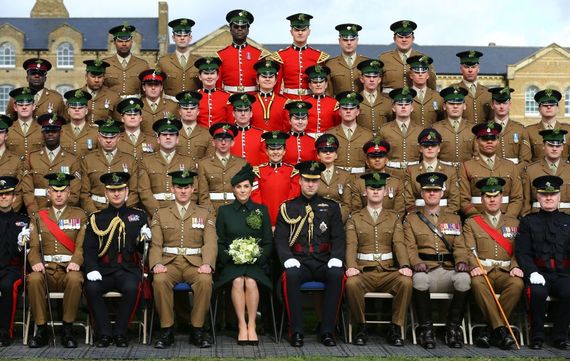 Catherine, Duchess of Cambridge and Prince William, Duke of Cambridge pose for a photograph with officers and guardsmen of 1st Battalion the Irish Guards during the regiment's St Patrick's Day parade at Cavalry Barracks on March 17, 2019 in Hounslow, England. (Photo by Gareth Fuller - WPA Pool/Getty Images)

The Irish Guards, who recruits mainly from Northern Ireland, was founded by Queen Victoria in April 1900 to commemorate the Irishmen who died fighting during the Boer War.