Dog breed, which dates back to 7000 BC Ireland, only third species known to be capable of producing identical twins. 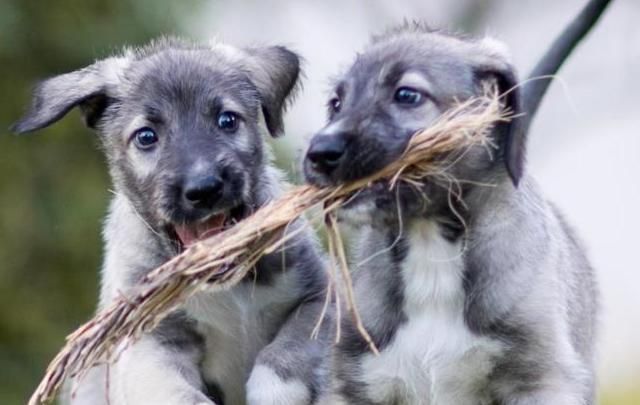 Two Irish wolfhound puppies, born in October 2015, in South Africa, are believed to be the first two identical twin dogs in the world.

DNA tests have proven that the two puppies, Cullen and Romulus, are genetically identical. The Irish wolfhounds are only the third known species capable of producing identical twins, after human beings and nine-banded armadillos.

The Irish wolfhound, hunting dog breed, were brought to Ireland as early as 7000 BC.  Their name in Irish is Cú Faoil, cú meaning war and the dogs were used in battle, as hunters and guards. The Irish dogs, on average grow to between 33 and 36 inches tall for males and two or three inches shorter for females.

The dogs are mentioned in Irish laws and in Irish literature, dating from the 5th century or, in the case of the Sagas, from the old Irish period (AD 600-900).

Irish wolfhounds can grow up to and over 36 inches.

The identical dogs, Cullen and Romulus, were identified by South African vet Kurt De Cramer. He delivered their mother’s litter by Caesarean section. The puppies shared a single placenta.

"When I realized that the puppies were of the same gender and that they had very similar markings, I also immediately suspected that they might be identical twins having originated from the splitting of an embryo," de Cramer told the BBC.

This is a rare occurrence and usually results in the death of the puppies shortly after birth however, De Cramer told the BBC that the puppies have thrived since.

He said “It is even less likely for placenta-sharing puppies to survive, because of several complications relating to nutrient and oxygen supply from a single placenta having to do the job that is normally done by two placentas.”

The puppies are now reaching a similar size to the five other puppies from their litter despite starting out as the runts.

Cullen and Romulus are happy as Larry, now normal size having been born the runts of the litter.

At six-weeks blood and DNA samples were taken from the puppies to confirm they were monozygotic twins, meaning they had once been the same fertilized egg.

Puppies in litters often look quite similar but Cullen and Romulus, despite having identical DNA, do have small differences in the white markings on their paws, chests and tips of their tails. However, their DNA and the research carried out at Australia’s James Cooke University, confirmed that they are world’s first recognized identical twin dogs.