The Redemptoristine Nuns at the monastery of St Alphonsus in Dublin took on the Jerusalema dance challenge made famous by members of An Garda Síochána. 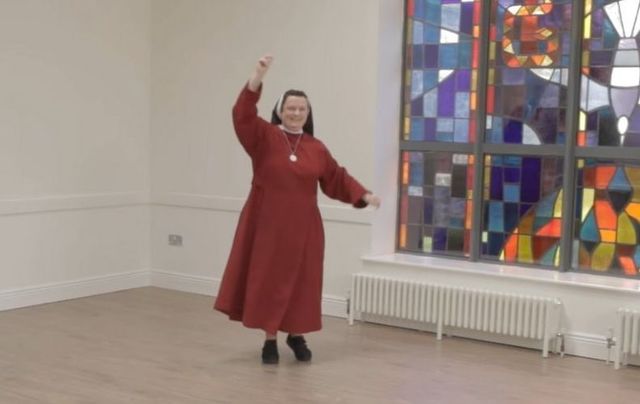 An order of Irish nuns at an enclosed monastery has become the latest group to take on the viral Jerusalema dance challenge made famous by An Garda Síochána last month.

The Redemptoristine Nuns at the monastery of St Alphonsus in Drumcondra could be seen moving their feet to Master KG's viral hit "Jerusalema".

The 13 nuns, who range between 28 and 92 years old, practiced the steps last week and uploaded the video to their Facebook page on Monday where it has been liked more than 3.4k times.

Sister Lucy Conway told RTÉ News that the nuns made the video the "cheer people up" during Ireland's third COVID-19 lockdown and said that it was their way of offering prayer.

She said that the nuns had found the third lockdown especially difficult and that the dance challenge "lightened their hearts".

"We wanted to cheer people up, it's been a tough time," Sr. Conway told RTÉ.

The nuns took on the challenge after they were challenged by their fellow Fathers and Brothers and took a number of days to learn the steps of the viral dance challenge.

Ten of the sisters took part in the video, dancing across the monastery's halls, rooms, and grounds, while the other three nuns filmed them and clapped them along from behind the camera.

Sister Gabrielle Fox said that the nuns didn't mind taking part in the social media challenge because they believed it was a prayer initiative.

"It's not just a gimmick. It was purposely done as a prayer," she told RTÉ News.

A number of groups in Ireland have taken on the Jerusalema dance challenge since An Garda Síochána went viral with their effort last month, including the Dingle Coast Guard and residents at nursing homes around the country.