Irish Grandad Billy and his doting granddaughter Aine Kennedy had plenty of craic on TikTok with their fun videos throughout the pandemic. 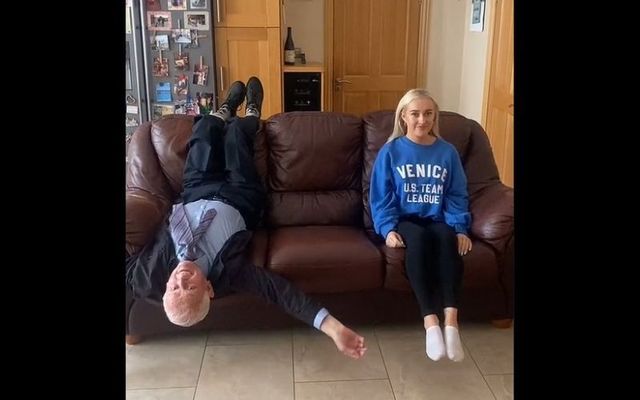 Grandad Billy and his granddaughter Aine Kennedy in one of their most popular TikTok videos. ainekennedyyy, TikTok

“It’s my grandad's TikTok at this stage,” Irish woman Aine Kennedy says in the bio of her TikTok page that boasts more than 11.6 thousand followers.

Indeed, Aine’s doting Grandad Billy has become a breakout TikTok star over the past two years.

Aine told Evoke last summer that Grandad Billy, a native of Dublin, moved in with her and her family in Co Kildare when the pandemic first began as he was getting a bit lonely on his own.

With plenty of time on their hands, Aine encouraged her grandad to check out TikTok, a social media app that has exploded in popularity with the onset of the pandemic.

In November 2020, when Ireland was under stage 5 lockdown, Grandad Billy appeared in his very first TikTok on Aine's page. Despite the restrictions, Grandad Billy was having the craic with his granddaughter during a day filled with tea, viral dance moves, and even a couple of bottles of wine:

He said: “It’s very good, there’s always going to be wrong with it, but there’s something wrong with everything. Instagram is more difficult to handle, it’s not as intuitive as TikTok.

"I didn't even know what going viral meant... It is bloody ridiculous... it is utterly mad."

Aine told DublinLive: “I told him to download TikTok during the pandemic so he wouldn’t be bored, you’re learning stuff and I knew the algorithm would adjust to his interests.

“It’s all politics on Billy’s TikTok, meanwhile mine is all make-up. I think it’s really good for all age groups.

“Our best video has 1.2 million views and it took us two days to record it. I was getting frustrated because we didn’t know how to make it funny and I just left it because it’s not fun if it’s like a chore but a week later we had an idea. People have eagle eyes, people noticed that he changed his socks.”

The video Aine referenced, her and her grandad's take on a popular TikTok trend, has since drawn more than 1.5 million views:

Grandad Billy, thankfully, shows no signs of slowing down. Back in October, Aine posted a TikTok with the caption “Guess who wanted to go zip lining for his 82nd bday” that featured Grandad Billy, all smiles, zipping away:

Guess who wanted to go zip lining for his 82nd bday 🤣

♬ i am fckin crazy - tan

Well done to Grandad Billy and Aine for sharing some smiles throughout the pandemic!