Candidate must have a great knowledge of fake tan, be able to identify fake news, and be more liberal towards exclamation marks and capital letters than minorities. 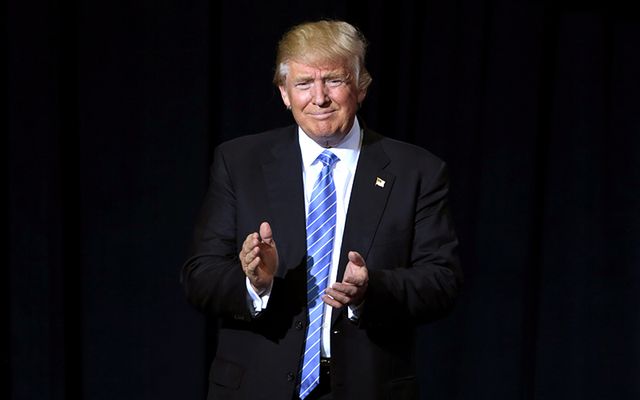 Candidate must have a great knowledge of fake tan, be able to identify fake news, and be more liberal towards exclamation marks and capital letters than minorities. iStock

Irish bookmakers Paddy Power are looking for a three-month hire to deal solely with their extensive range of novelty wagers concerning US President Donald Trump. From the possibility of the president ordering his face be added to the lineup up at Mount Rushmore to whether he will sign an executive order about the existence of alien life, this new Donald Trump gambling expert will certainly have their work cut out for them in keeping up with the ever-changing rollercoaster that is the life of the 45th President.

Known for their often over the top stunts and advertising and for their funny, often whimsical, bets, Paddy Power will now hire a “head of Trump betting” who will keep track of the many bizarre bets regarding the President.

“We want to make American politics great again. Because let’s face it, there’s no chance Trump will,” the job advertisement reads.

Advertising the job, to be located in Dublin, Paddy Power parent company Betfair state: “Following the huge demand on the back of the 2016 US Presidential Elections, we are looking for a Head of Trump Betting to manage our newly launched ‘hub’ of specials around the President. We’re looking for a marriage of more convenience than Donald’s to Melania.

“With more than 100 special bets online, the successful candidate will monitor and manage existing Trump markets while devising new specials to launch. They will also need to build a wall around the hub to ensure foreign bets don’t get in.”

The bookies aren’t just able to dole out the insults, however, as they take a laugh at themselves in reflecting on their unfortunate decision last year to pay out on a Hillary Clinton win a few days early. The company is believed to have lost as much of $6 million in the fourth quarter of last year with thanks to Trump’s win having paid out $1 million in late October to those who had voted against Donald Trump.

Paddy Power are recruiting for a 'Head of Trump Betting' pic.twitter.com/B43Hf5n57j

“You must combine a passion for the topical news agenda with a keen interest in US Politics and an ability to think outside the box,” the posting states.

“Mind you, any suggestions to pay out early on an Election will be shot down faster than a good journalist asking Trump a difficult question.”

And while the job is genuine and requires you to work as part of a team, have an aptitude for Excel, and all the normal stuff, you must also have “substantial experience with fake tan”, “be more liberal towards exclamation marks and capital letters than minorities”, have an “ability to detect Fake News” and are required to supply a full medical history.

“Well, we don’t want you doing a Hillary on us,” they joke.

“The BAU elements of the role will be odds compilation, in-play trading and sending round the most bats**t Trump quotes for the whole company to laugh at,” the posting concludes.

Current Trump bets on the Paddy Power site include which member of the Trump administration will resign next, with Attorney General Jeff Sessions the clear favorite at 2-1.

Wagers also exist on his being married for a fourth time while in office, who will be the first of his children to condemn something he says as President; Trump and Putin receiving the Nobel Peace Prize, and Trump holidaying in Russia throughout every year of his Presidency.

Cute PR from @paddypower - advertising for a Head of Trump Betting pic.twitter.com/Z9U1QnjKjJ