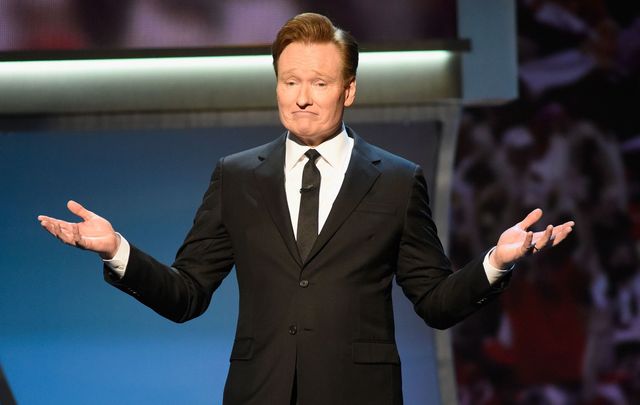 Could Conan O'Brien be related to Irish ancient royalty? Getty

The resemblance between Conan O'Brien and Clonycavan Man is uncanny!

Irish American late-night host Conan O’Brien shared a picture to Facebook that begs the question - is O’Brien a descendant of ancient Irish royalty?

“Someone visiting Ireland sent me this photo of an ancient bog person,” wrote O’Brien of the picture of the mummified bog man.

Someone visiting Ireland sent me this photo of an ancient bog person. It looks just like me when I forget to moisturize.

“It looks just like me when I forget to moisturize.”

The picture that O’Brien shared is of a bog body known as Clonycavan Man, who was found in a turf-cutting machine in Co Meath in 2003. The body was eventually carbon dated back to 392-201 BCE.

Research showed that Clonycavan Man’s death was particularly brutal, but also ritualistic which suggests that he may have been of higher status during his lifetime.

Clonycavan  Man's body was disemboweled, his head was struck three times with an ax, his body was struck once, and his nipples were removed.

Ned Kelly, keeper of antiquities at the National Museum of Ireland, has said "Sucking a king’s nipples was a gesture of submission in ancient Ireland. Cutting them would have made him incapable of kingship in this world or the next."

Perhaps most notable about Clonycavan Man is his signature red hair - just like Conan O’Brien! Clonycavan Man was even found to have a primitive sort of hair gel in his hair.

Conan O’Brien, as if his name wasn’t a dead giveaway, has strong Irish roots. Though he was born and raised in Massachusetts, O’Brien’s family history shows that his ancestors immigrated from Ireland, most likely Co Waterford, in the 1850s.

Still in touch with his Irish roots, O’Brien has taken his act to Ireland several times. Check out the video below to see O'Brien paying the old country a visit:

So what do you think, could Conan O’Brien be a descendent of an ancient Irish king?