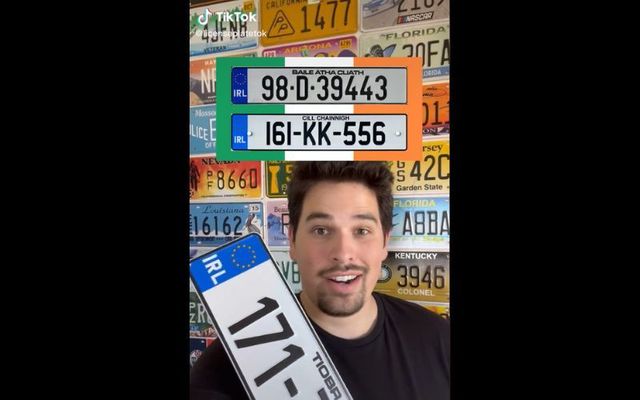 Ethan the License Plate Guy, who says he “tries to make license plates fun,” gives a great overview of the history of Ireland’s license plates in a recent TikTok shared on his @licenseplatetok account which boasts more than 167k followers.

"Irish license plates are some of my favorite in all of Europe," Ethan says in his TikTok that has been liked more than 48k times in about two days. "So let me tell you a little bit about why I think they're so cool."

Ethan said that Ireland got its first license plates around 1904 and that Ireland’s license plates “looked more or less the same” from 1922 through the 1980s - “they were all black with either white or silver characters and included a region code and while the country also introduced these red reflective plates on an optional basis in the 1960s, the numbering formats in Ireland stayed pretty consistent."

He continued: “But then in 1987, Ireland introduced what is one of my favorite and also one of the most logical plate number formats in the entire world which consists of three parts.

“The first few numbers are the original year of registration.

“Then in the middle, you have a one- or two-letter code denoting what city or county your car is registered in.

“And then the final section is just a block of sequential numbers that count upward from one, but in a lot of jurisdictions, the number one itself is reserved for the Lord Mayor."

Indeed, in  Cork, Dublin, Limerick, and Waterford, the number one license plates cannot be reserved, according to Citizens Information in Ireland.

Ethan continued; “In 1991, Ireland became the first country to adopt what I’ve always called the blue Euro band on the left side of the plate which is now used by more than 30 European countries, both in and out of the EU.

“That year also saw the Gaelic city or county name added to the top of the plate, but other than that, the numbering format really hasn’t changed except for in 2013, when the years were broken up into two parts. This essentially doubled the number of possible plate combinations.

Ethan went on to discuss the “variety” of Irish license plates, such as temporary plates, historic vehicle plates, military plates, and trade plates.

@licenseplatetok I meant to do this when I was in Dublin two months ago, but… 🇮🇪☘️ #foryoupage #fyp #licenseplatetok #ireland ♬ original sound - Ethan the License Plate Guy

In Ireland, license plates are also known as "number plates" or "reg [registration] plates." Legislation surrounding license plates in Ireland can be found online here in the Irish Statute Book.