Ireland’s favorite turkey pardoned by Dublin's US Embassy for Thanksgiving 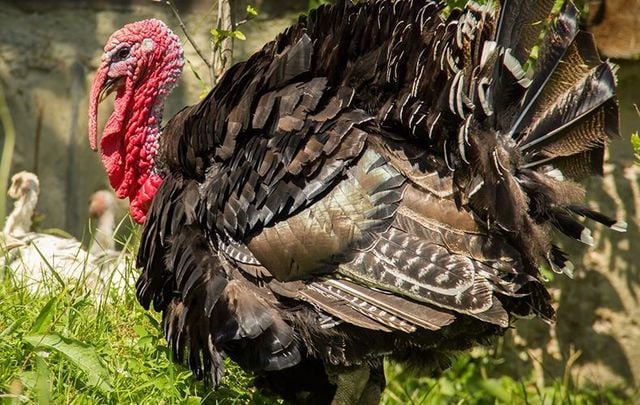 Ireland's top turkey has officially been pardoned by the US government. iStock

At a Thanksgiving reception the acting U.S. Ambassador, Chargé d’Affaires Reece Smyth pardoned Dublin entertainer “Dustin the Turkey” ahead of the American holiday.

Mimicking the annual White House tradition, which dates back to the 1940s, of pardoning a turkey ahead of Thanksgiving Reece honored a request he received from the Irish entertainer, a comedian who has represented Ireland, unsuccessfully, at the Eurovision song contest.

The tradition goes that Thanksgiving, the U.S. President “pardons” a hand-selected turkey, sparing the bird from someone’s dinner table and ensuring the rest of its days are spent roaming on a farm, doing whatever it is turkeys love to do.

Chargé d’Affaires Reece Smyth received a request from Dustin the Turkey to be pardoned by him. It is not common for U.S. Ambassadors to exercise such clemency, but an exception was made in this case.

Dustin the Turkey and Chargé d’Affaires Reece Smyth at the US Ambassador's resdience in Dublin.

Since 1947, the chairman of the U.S. National Turkey Federation has presented a turkey to the President. Back then, however, birds were more likely to be destined for the White House dining table.

Speaking of the pardon Chargé d’Affaires Reece Smyth said “I had to think long and hard and I consulted with many members of the Irish public on what was the best course of action. While opinion was divided on whether it was time to finally roast this turkey, ultimately I decided to give him the benefit of the doubt and spare him. I just hope he appreciates this second chance and doesn’t let me down in the future”

After the event, Dustin the Turkey said "I simply hope that my own great leader President Michael D. Higgins will take the nod from the Americans and pardon me this Christmas. Go on ye good thing.”

On Tuesday President Donald Trump pardoned a turkey voted for by the public. Drumstick and Wishbone the turkeys, who had been living at the White House, had their fate decided by public vote via The White House’s Twitter account.

Today, we continued a wonderful American Tradition at the White House. Drumstick and Wishbone will live out their days in the beautiful Blue Ridge Mountains at Gobbler’s Rest... pic.twitter.com/fsS8B8f5UR