He pops the question at Dublin U2 concert – you’ll shed a tear, for sure!

U2's homecoming at Croke Park was magic – but more so for this happy couple! Congrats! 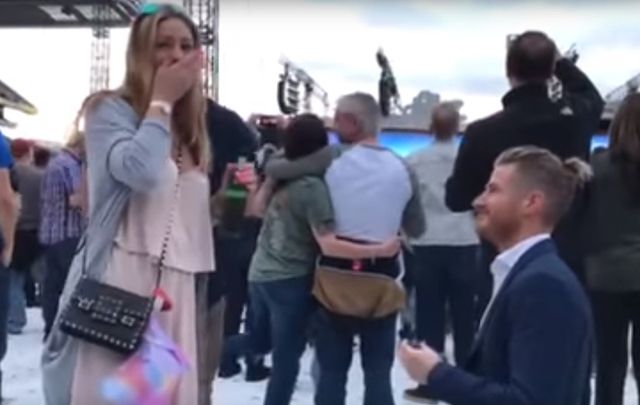 Will she, won't she?! Gorgeous wedding proposal at U2's Croke Park gig.

It doesn’t get more romantic or Irish than this! A couple flew all the way to Dublin from Dubai to see U2 play at Croke Park. What Fiona Robertson didn’t realize was that her romantic beau, Aaron Maher, planned to get down on one knee and propose as the hit song “With or Without You” played.

Get your tissues out! There’ll not be a dry eye in the house!

Of course, she said “Yes!!” What a proposal and poor Robertson hadn’t a clue. There she was singing along to Dublin’s biggest band when her boyfriend popped the question.

Robertson, from Glasgow, Scotland, told the Irish Independent “I love U2 and Aaron had surprised me with tickets on our anniversary.

"We flew in from Dubai to go to the gig but had problems getting the tickets delivered so we didn't think we were going to get to go at all."

She admitted she had no idea what her boyfriend had in store for her.

“I was on a buzz when we finally made it there and was completely gob-smacked when he pulled out that wee box!

"The poor boy was crapping it in case security found it and opened it when we were coming in! Surprise would have been blown then!"

The ecstatic Glaswegian was also delighted that Maher had given his phone to people behind them to video the moment.

“It's amazing to be able to watch it over and over again because I was so surprised at the time, I just started to cry.  I don't think I even got to properly say thank you to the people watching and filming so I'd like to say thanks to them. I don't even remember their names!"

She adds, "I'm so unbelievably over the moon and still buzzing from the whole experience.  I only went to see my favorite band live.  I could never imagine it would end up the best night of my life so far."

U2’s homecoming to Dublin is being hailed as an utter triumph. Celebrating the anniversary of their hit album 'The Joshua Tree' the band put on a massive show at the Dublin stadium, including Noel Gallagher’s High Flying Birds as the support act.

Where the streets have no name, complete with tricolor flyover. Special moment in #CrokePark for #U2TheJoshuaTree2017 #U2 pic.twitter.com/WdJm1uDNP0