A 2018 video of a man pulling off a seemingly-impossible Guinness trick has found a new round of viral fame. 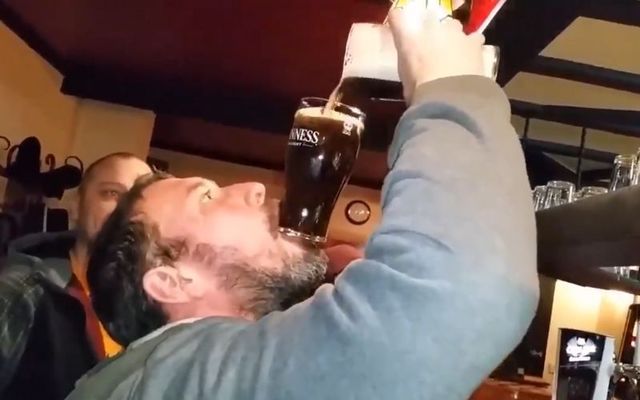 A video of a man pulling off an impressive Guinness trick has gone viral (again) over the past day.

The video was re-shared on Twitter on March 10, about three years after it was originally recorded at Spy Bar Jesmond in Newcastle-Upon-Tyne.

Despite floating around the Internet for that long, the March 10 tweet has racked up more than 18k likes in about 24 hours.

The viral video opens with a man, whose name isn't known, preparing to do his trick, in what appears to be in the face of great doubt from his fellow pub patrons.

On him in front of the bar is one full pint of Guinness, and another empty, upside-down Guinness pint glass.

"He's basically going to drink this pint out of that [empty] glass without touching it," says one man, off-screen.

The man then bends over and takes the bottom of the upside-down empty pint glass into his mouth. He then tilts his head back and begins to pour the full pint of Guinness into the empty pint glass that he's holding in his mouth - a trick in of itself!

Laughter erupts around the bar.

"Are you getting the shamrock on the top as well?," one person asks jokingly.

Once the pint of Guinness is transferred with only minimal spillage, the man, stunningly, begins to move the full pint of Guinness from his mouth so that it's standing on the bottom of the newly-emptied and upside-down pint.

Balancing the full pint of Guinness on the upside-down empty glass, the man, with a big smile on his face, begins to drink the pint in one gulp without his hands.

(Of course, it is worth noting that this pub trick is nowhere near responsible consumption and we certainly wouldn't recommend you try this on your own! Guinness encourages only responsible drinking of their product.)

While the video has gone viral over the past day, it turns out that it has been floating around the annals of the Internet since 2018.

Back on March 13, 2018, Spy Bar Jesmond, a sports pub in Newcastle-Upon-Tyne, shared the original video of the unnamed Guinness genius pulling off his impressive trick.

In their post, which has since been liked more than 48 thousand times, the bar wrote; “This guy must have wasted so much Guinness before he mastered this... 4 days until I’ll be trying this and spilling a full pint down myself.”

This guy must have wasted so much Guinness before he mastered this... 4 days until I’ll be trying this and spilling a full pint down myself 🍺 #stpatricksday