The American country music star who caused a national uproar in Ireland in 2014 in a Croke Park controversy is a big fan of the county team who were wrapped up in their own Croke Park scandal this year. 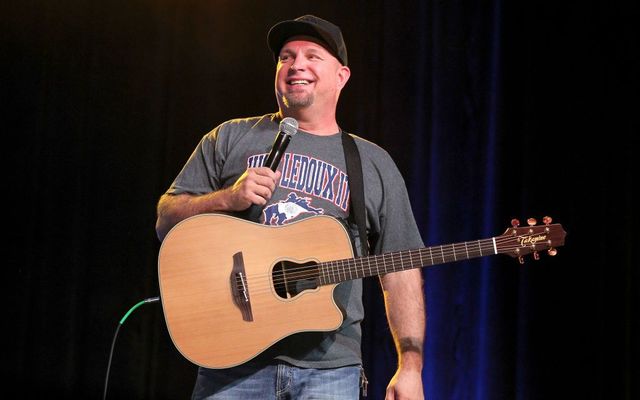 Both the Mayo football team and Garth Brooks have faced their share of Croke Park controversy but thankfully, they appreciate that a good singsong can cure even the bitterest disappointment.

The worlds of two Croke Park controversies, “Newbridge or Nowhere” and Garth Brooks, collided this week as the American country music singer shared his love for a viral video of the Mayo senior football team having a great sing-along to his hit “The River.”

After the team’s surprising third-round-qualifier loss to Kildare knocked them out of the 2018 GAA Football Championship, they could be seen drying their tears in Matt Molloy’s pub in Westport, Co Mayo, by putting on a remarkable performance of the classic country song, quickly becoming a viral hit.

Read more: Is there really an All-Ireland curse on Mayo?

On International Friendship Day on July 30, Brooks posted a live video in which he was shown watching the video for the first time and he more than loved it. We already know that the singer has a special place in his heart for the Emerald Isle and we can safely say that the Mayo football team and their leader Aidan O’Shea, in particular, are among some of his favorites after this performance.

"I love this guy right here,” Brooks said, pointing at O’Shea and being very impressed that he and his backing singers, Cillian O'Connor, Donie Vaughan and co., were able to gracefully master the key change.

You can see the full original video of the Mayo team here:

Aidan O’Shea and teammates from @MayoGAA sing an amazing rendition of ‘The River’ by Garth Brooks following their defeat to Kildare.

If anyone knows who took this video, we’d love to credit them pic.twitter.com/CQjEqSsXQn

Back in 2014, Brooks brought Ireland into a Croke Park standoff, in a battle with residents close to the iconic GAA stadium as the refused to allow him to play more shows than had first been advertised, despite the tickets having already been sold. The singer set an ultimatum in which he said he’d play all of the gigs or none, resulting in him not playing a single date in Croke Park.

The Mayo football team were also involved in a Croke Park ultimatum in 2018 when Kildare told the GAA bosses that they would not play on the Dublin pitch when they were scheduled to play at home in Newbridge. The standoff sparked the phrase “Newbridge or Nowhere” with the Lilywhites saying that the would line-up on their home field or not at all, backed by Mayo and many across the country. Kildare eventually won their battle and treated their fans to a shocking defeat of Mayo to add to the success.

So who do you think sings “The River” better: Garth Brooks or Mayo?