Two foxes stranded on a sandbank in a Dublin estuary were featured in a "unique video" shared by the Irish Coast Guard on Twitter. 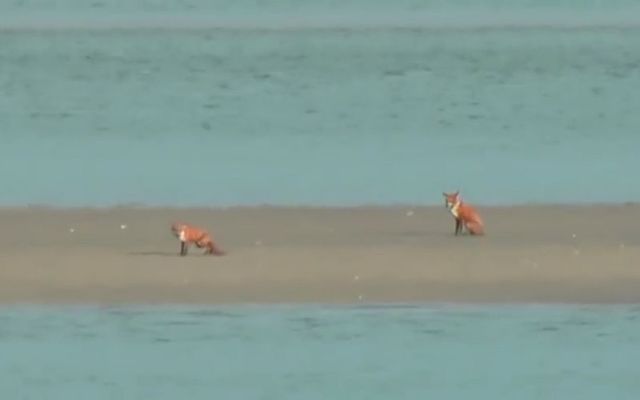 Two foxes that became trapped on an estuary sandbank in Dublin on Thursday are going viral on Twitter.

The Irish Coast Guard shared a "unique video" documenting how the nocturnal animals found themselves trapped on an estuary sandbank in Baldoyle, a common occurrence for human visitors at the location.

"This video shows how quickly the situation can change and the ground around you disappear until nothing is left," the Howth Harbour Station of the Irish Coast Guard wrote on Twitter.

🦊🦊 This video shows how quickly the situation can change and the ground around you disappear until nothing is left. Did they make it back safe?… 1/2 pic.twitter.com/V1IiQCFH7y

The Coast Guard said the foxes eventually swam back to shore.

The Coast Guard added that the incident has been occurring to a number of humans who have visited estuaries over the summer.

They encouraged walkers to check tide times to avoid being trapped on sandbanks.

"Before walking out on the sands, just search “tide times” from your phone to plan your turnaround time while the tide is still dropping," the Coast Guard said.

The hot weather has arrived in North Dublin! ☀️ This next thing happens a lot… (and how to avoid it!)

🏖🚶‍♀️You’re out enjoying a nice long walk down the beach. No wind, hot and sunny, bliss. You’re getting your steps in, look at you go 😎… until you turn around… 1/2 pic.twitter.com/bYsD7SvZOw